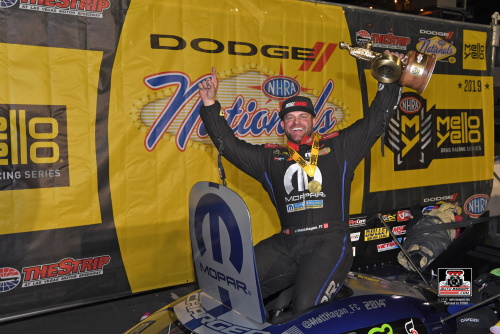 LAS VEGAS (November 4, 2019) – Don’t count Matt Hagan out. He proved that by making a major championship statement on Sunday at the Dodge NHRA Nationals Presented by Pennzoil when he captured his second consecutive Funny Car triumph behind the wheel of the MOPAR Dodge Charger SRT Hellcat Widebody.

By clinching the back-to-back victory, Hagan moved into third in the Funny Car standings, and with the points-and-a-half format at the upcoming season-finale, he now sits within two rounds of the current point leader, cementing himself as a viable threat to win the 2019 NHRA Mello Yello Funny Car world championship.

“I’m fired up right now,” said Hagan, who, with two Funny Car world titles on his racing resume, knows what it takes to get the job done. “When you have that opportunity to go into Pomona and still be in the championship hunt, that’s what gets my adrenaline pumped, gets me motivated, makes me want to dig. I love winning races, but it’s about this hunt; this is why we do this. I’m so proud of my guys; they know how to step up and rise to the occasion. I wish Pomona was tomorrow, let’s do this, let’s get it done.”

Starting from seventh on the eliminations ladder and with Dodge, MOPAR, and Pennzoil executives cheering him on from the starting line, Hagan stormed to the Vegas winner’s circle by first taking out challenger Paul Lee with a run of 3.909 seconds. Next, he had to snap a four-race losing streak versus teammate Tommy Johnson Jr. He took out the No. 2 qualifier by posting his best pass of the weekend, 3.869 seconds, to advance to the semifinal where he faced Bob Tasca III. This was a rematch of the final in Dallas two weeks ago, and the results were the same with Hagan once again turning on the win light to reach his sixth final of the season.

The 2017 event champion flexed his muscle in the final by leaving first and putting down an impressive blast of 3.876 seconds at 331.36 mph to drive away from opponent Jonnie Lindberg and secure his 33rd career victory, and fourth of the season. The win enabled Hagan to move within 56 points of Robert Hight, who occupies the No. 1 spot.

For any of the doubters that had written Hagan off as an early 2019 title contender standout, he and his Dickie Venables-led team proved they were a force to be reckoned with when they picked up their first win of the six-race Countdown at the AAA Texas NHRA FallNationals two weeks ago. The win came after the team had struggled in the first two races of the Countdown, at one point falling as low as ninth in the standings, but they methodically chipped away at it, and have successfully climbed their way back into title contention.

“The first two races of the Countdown we struggled hard, and I think a lot of people wrote us off,” said Hagan of his team’s second-round loss in Reading followed by a crushing first-round defeat in St. Louis. “You’re a product of your environment, and you kind of feel like okay, well maybe that’s it, and then we started to bounce back by going to the semis in Charlotte, and we’re like alright we can still do this. I wanted to get my pom-poms out and start cheering because we can still win this thing, and it’s hard to get two-in-a-row, but we did, and that shows you what we’re capable of. We’re going to go into Pomona, work as hard as we can, and we’re going to double-check and triple-check ourselves. My team is going to put the best race car underneath me, and I’m going to drive to the best of my abilities, and it’ll be what it’ll be.”

Hagan’s win was Funny Car triumph No. 159 for Don Schumacher Racing, and 344th overall for the winningest team in NHRA history. 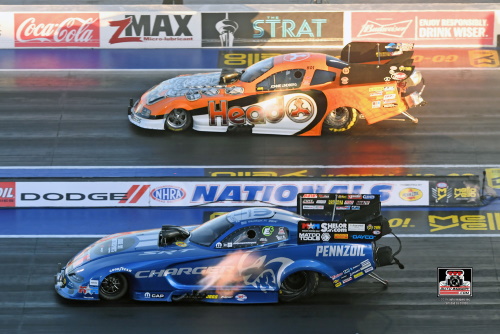 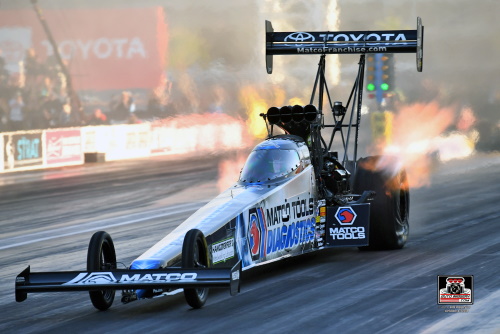 Race Recap:
In what was billed as Top Fuel’s ‘marquee match-up,’ Antron Brown faced Terry McMillen in the first round on Sunday morning. Both Brown and his opponent were nearly even out of the gate, but Brown hazed the tires almost immediately. The veteran driver masterfully pedaled it and got his Matco Tools Diagnostics machine to recover instantaneously, but he wasn’t able to chase down McMillen, who had already powered to a sizeable lead.

Quotable:
“We learned a lot. The car is definitely leaving the starting line like we want it to. We were aggressive that lap against Terry (McMillen). They ran great all weekend and had lane choice. We were going to try and run a high .60 lap, and it didn’t hold. We’re looking forward to Pomona to keep working on a package to come out strong next year.” 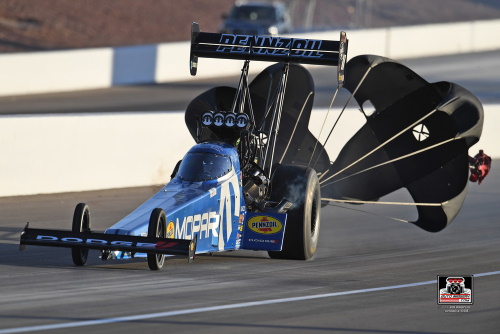 Race Recap:
After making the quickest run in track history with a stout 3.654 E.T. to earn her first No. 1 qualifier of the season, Leah Pritchett knew she had a machine capable of winning her second event of 2019 on Sunday at The Strip at Las Vegas Motor Speedway. Despite having cylinders out early, Pritchett drove her MOPAR Dodge Top Fuel Dragster around No. 16 qualifier Cameron Ferre in the first round to advance to the quarterfinals. In round two, Pritchett’s machine went up in smoke early in the run, and despite pedaling it twice, it never recovered, and she fell to opponent Doug Kalitta.

Quotable:
“Talk about a roller-coaster of a weekend. From a track record and No. 1 qualifier to a crazy day of eliminations. We had a cylinder out at the step in round one, and Cameron Ferre gave us a run for our money, but we were able to put on the win light. Then in E2, we need to have some sort of sage or luck-changer because we have these mechanical malfunctions that keep popping up on race day. It wasn’t a tune-up mistake in E2, we had a lock-up lever that broke at the hit, and all of that power was applied to the tires immediately, and that’s why we smoked them. There’s nothing we could’ve done differently in round two. Our championship hopes are pretty much dashed, but we’re going to be fighting extremely hard to finish 2019 strong.” 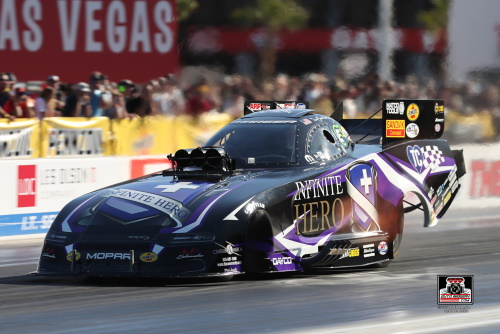 Race Recap:
Jack Beckman entered the race weekend with one goal in mind – narrow the gap between him and current point leader Robert Hight. As the No. 2 ranked Funny Car driver, Beckman began his weekend at The Strip at Las Vegas Motor Speedway sitting 70 points out of first.

After resetting both ends of the track record during qualifying, Beckman earned the pole position for the third time in 2019. The momentum from his strong qualifying performance carried into race day as Beckman rocketed the Infinite Hero Foundation Dodge Charger SRT Hellcat to low E.T. of round one to dispatch opponent Terry Haddock and advance to round two.

The quarterfinal round pitted the winner of the first Countdown event against Hight. In a matchup rife with championship implications, both drivers made solid passes, but it was Beckman’s throttle foot that earned him the holeshot win and allowed him to cut the point leader’s day short at round two. Next up for the 2012 Funny Car world champion was Jonnie Lindberg. This time it was his opponent who got the holeshot. Beckman attempted to reel him in, but Lindberg was able to cross the finish line first.

Beckman moves into the final race of the 2019 season 46 points out of the lead as he continues his pursuit of a second Funny Car world championship.

Quotable:
“It’s a gut punch. There’s no other way to spin it. The car did its job, the crew did their jobs, and I just flat didn’t do my job. I started to stutter-step against (Robert) Hight in the second round and caught myself, and then you try and get your head back in the game, and I was just slow on the tree in the semis. If I were two-hundredths better on the tree, we would’ve won that race. That’s what I get paid to do. It’s a tough loss to absorb, and it could have major implications at Pomona. If we had won that round, we’re within one round going into Pomona. Now we have to go two rounds further unless we can dominate qualifying and Hight stumbles. And Hagan is right back in the race now, too. It’s going to come down to four or five cars in Pomona, and I need to get my act together. The Dodge Infinite Hero team deserved a better performance from me.” 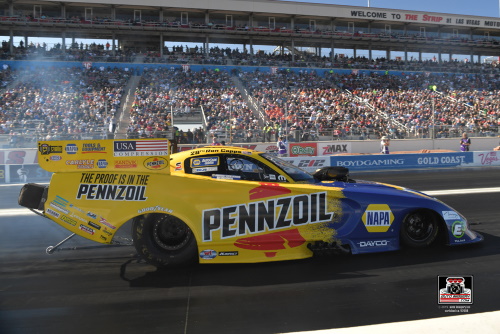 Race Recap:
After coming up short at the previous race on the NHRA tour, Ron Capps entered the Dodge NHRA Nationals Presented by Pennzoil looking to regain his place in the top half of the Funny Car point standings.

Behind the wheel of the Pennzoil Synthetics/NAPA AUTO PARTS Dodge Charger SRT Hellcat, the 11th qualified Capps drew fellow Countdown-contender Bob Tasca III as his first-round opponent. With less than 20 points separating Capps and Tasca, the winner of the round-one matchup would claim the No. 5 ranking in the point standings with a chance to continue their pursuit to the top of the board.

It was a nail-biter of a race between Capps and Tasca with both cars glued together from start to finish. Both drivers powered their 11,000 horsepower machines to identical 3.911-second elapsed times, but Tasca’s slight starting line advantage allowed him to edge past for the win.

Quotable:
“It’s heartbreaking. We’ve been searching for our race car in Dallas and here in Vegas. I can’t say enough about (crew chief) Rahn Tobler and our NAPA AutoCare guys, they keep on plugging.

“We had a great scenario in Dallas by facing someone in front of us in points, and couldn’t take advantage of it. We were okay in qualifying here in Vegas, but Tobler was still trying to find what was giving him fits in the clutch department. Tobler and all of the guys worked late into the night last night, and they found the issue. We had a great race car in round one, and I’m really proud of my guys. A lot of hard work and NAPA KnowHow went into getting our race car back. Moments like that are when you have to be at your best, and unfortunately, I left the starting line second. I didn’t have a bad light, but he had a great light, and those are the moments that really hurt as a driver. We’ll pack it up and go to Pomona.” 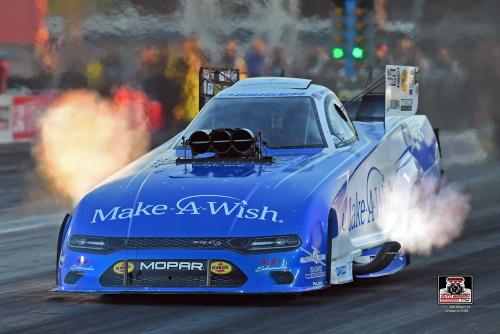 Race Recap:
Tommy Johnson Jr. and the Make-A-Wish Foundation Dodge Charger SRT Hellcat team were solid throughout qualifying, powering to the second-quickest run of three out of four sessions to earn the No. 2 spot heading into Sunday’s elimination rounds.

Johnson opened race day by clocking a winning 3.894-second E.T. over Jim Campbell to set up an intramural battle with his MOPAR-powered teammate Matt Hagan. Johnson was first to stand on the throttle, but Hagan was able to pull ahead by the 60-foot mark and went on to post the quickest run of the day to defeat his stablemate.

Quotable:
“We had a tremendous car this weekend. It was a good comeback after struggling for a bit for a few races to come back with a strong car. We want to finish this season on a high note, and we did a good job of that this weekend. (My teammates) knew we had a good car, and it’s unfortunate we had a great car and didn’t make it to the finals. I feel confident going into Pomona that we can run really well and get back to the finals and end this season with a win. I’m looking forward to getting there.”