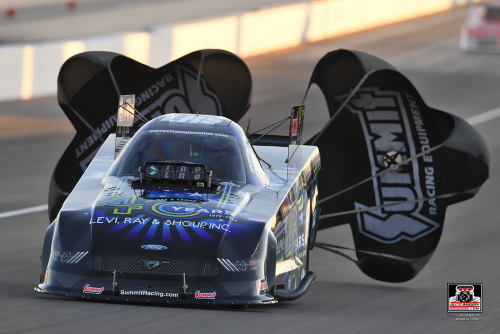 LAS VEGAS (November 4, 2019) – A happy racecar warms a competitive driver’s heart, and throughout qualifying The Strip at Las Vegas Motor Speedway this weekend, Tim Wilkerson was a happy man. His Levi, Ray and Shoup Ford Mustang was responsive, receptive, consistent, reliable, and most of all a competitive racecar that looked perfectly capable of going rounds on Sunday at the Dodge NHRA Nationals.

Qualified in the No. 9 position, Wilkerson had a tough draw first round in Funny Car points leader Robert Hight, but he was optimistic after his LRS Mustang showed such promise on the first two days of the event.

“It dropped a hole out there about 150 feet,” explained Wilkerson, with a shake of his head. “We made five runs, and the only time it dropped a hole was first round. There’s no rhyme or reason to it – it’s just one of those things.”

No. 10 in the standings, Wilkerson is aiming at climbing up a spot or two to finish the season.

“We’ll pack our stuff up, go to Pomona, and see if we can do better there,” said the driver who has finished in the top 10 in 14 of the 22 years he’s raced a nitro Funny Car.

“We’re in test mode now, to try to see if we can get down through there a little faster. We’re still going to try to win rounds. We had a good chance today to move to 8th or 9th in the points, so it’s pretty upsetting. It is what it is, though. We have a chance to get back to a single digit in Pomona. I hope we can.”

The next event on the 2019 Mello Yello Drag Racing Series schedule will be the final event of 24 for the season. The Auto Club NHRA Finals will take place at Auto Club Raceway at Pomona, November 14-17.