LAS VEGAS (November 4, 2019) – The points chase in NHRA’s 2019 Mello Yello Drag Racing Series Countdown to the Championship is nearing crescendo following the Dodge NHRA Nationals at The Strip at Las Vegas Motor Speedway. The event is the second to last of the season, and it saw a rise in the standings for KB Racing’s Summit Racing pilots.

Greg Anderson, who earned the 104th No. 1 qualifier award of his career at the event, got the nod over a red-lighting Cristian Cuadra in the first round before bowing out to Summit Racing teammate Jason Line in round two. Anderson had the quickest elapsed time of eliminations with his 6.603-second pass at 207.62 mph in the opening act. He moved up to the No. 6 position in the standings, partly in thanks to a slew of bonus points in qualifying. 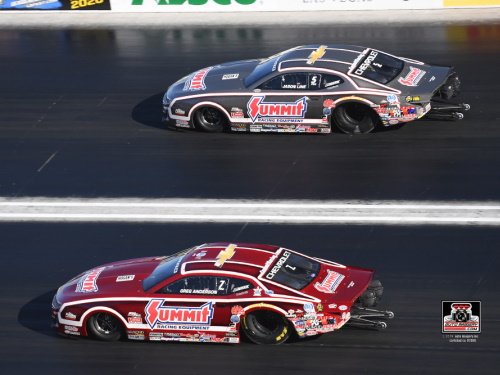 “We slipped a little second round, missed it a bit and lost a couple hundredths, but I just didn’t have a good enough light first or second round. I’m kicking myself, because I think I know what I was doing wrong, and I could have rectified it by third round. I know my car would have been a little bit better, too, and I believe I had the horse to beat again today. I just ran into the wrong guy at the wrong time.

“We’ll go to Pomona and try as hard as we can. Anything can happen, and the good news is that I’m very happy with my racecar. I had a chance to win this race, and we’ll have a chance in Pomona, too.”

Anderson is now 157 points out of first place, with 191 points available at the final race of the season. His teammate, silver Summit Racing Chevrolet Camaro driver Jason Line, is 116 points out of the lead, while KB Racing-powered Bo Butner is 113 points back.

“It’s never a good thing when you have to race your teammate before the final round, and it feels like we’ve had that happen a lot lately,” said Line, who trampled championship-hopeful Matt Hartford in the first round with a quicker reaction time and more efficient pass to advance to his round-two meeting with Anderson.

“We had hoped to do better here, especially for Ken and Judy Black and everyone at Summit Racing, but it didn’t work out as we’d hoped,” said three-time Pro Stock champ Line, a 50-time Pro Stock winner. “There is still a lot of fight left in this team, so we’ll move on and do our best. We’ve got one more race to go this year, and everyone on this team wants to bring that last Wally home.”

Butner began his day with back-to-back wins over KD Racing drivers, first knocking out Val Smeland, then veteran driver Kenny Delco. Butner could only be stopped by the eventual event winner, Erica Enders. In the semis, she clocked a 6.638, 207.46 to his 6.645, 206.20.

“I think we were a little hot in low gear, because our 60 foot was off a little bit, but we went after it. That was good, and we had a very good car all weekend,” said 2017 Pro Stock world titlist Butner, who has more wins in the category this year than any other driver (four). “This is usually our race; Vegas is usually good to us, but Pomona is, too. It’s not over. We really needed to win those rounds today, but anything can happen once we get to Pomona. We’ve seen that, so we’ll see. We’re not giving up.”

The next event on the 2019 Mello Yello Drag Racing Series schedule will be the final event of 24 for the season. The Auto Club NHRA Finals will take place at Auto Club Raceway at Pomona, November 14-17.