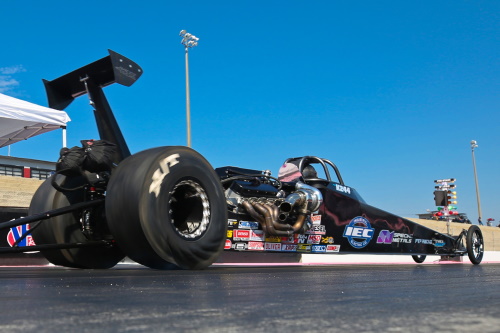 With an event win and the 2019 PDRA Lucas Oil Elite Top Dragster world championship in hand, Farmer feels he proved his point.

“We really got our point across, especially since it was my first season running that fast,” said Farmer, 26. “You can’t really tell me that it was driver experience. I’m pretty much going to count most of my wins to that car and how consistent it was. It could just go rounds. It proved our point, and just having all our hard work pay off made it worth it.”

Farmer, an accomplished former Jr. Dragster driver with experience in big-money bracket racing, made his Elite Top Dragster debut at the season-opening PDRA East Coast Nationals presented by FuelTech at GALOT Motorsports Park. Driving his brand-new nitrous-assisted Race Tech dragster, Farmer qualified No. 14 and to his surprise, worked through four rounds to win the event.

“I went into that race thinking, ‘I’ve only been to one test session in this thing. I’ve got it down the track twice all the way, and here I am going to compete. I’m probably going to be a duck,’” Farmer said. “I ended up winning the race, so it was a good day. That turned my whole view of everything and I got really comfortable in the car. We hadn’t decided if we were going to take all the time off work to go chase the points, but after I won that race it was a pretty obvious decision. I’m sitting No. 1, might as well try to keep it.”

Farmer maintained a strong lead through the next four races, adding a runner-up finish at the Northern Nationals presented by Callies Performance at Dragway 42 in July.

Then, a high-speed crash during a night test session at Darlington Dragway over the summer nearly put an end to what was shaping up to be a dream season.

“I went through the finish line and grabbed the brake pedal and it was like the car was on ice,” Farmer said. “Came around, I rolled it twice at 177 mph, wrecked the car. I had put a 550-point lead in the points, so I was over a race ahead of the No. 2 guy. I was having a pretty good season, wrecked that car and I was pretty devastated, but I got back up.”

One of Farmer’s customers, NHRA sportsman star Phil Unruh, offered up his new twin-turbocharged dragster for Farmer to drive for the rest of the PDRA season. Farmer graciously accepted the offer, though he admits it took some time to get comfortable in the boosted entry.

“I had just come out of wrecking a race car,” Farmer said. “I got in that thing and it was wanting to hit the wall almost every pass. It was not fun. I was not having a good time. But I wanted this championship bad. I’m telling you, it has been a dream of mine to be a champion since I was a little kid, so I wasn’t going to give it up. I was scared to death. I still had the willingness to do it, but man, was I scared. I kept making hits, kept getting data. We finally figured it out how to get that thing down the track.”

Farmer and his father, Russ, did eventually tame the turbo dragster, but it happened after Farmer failed to qualify at the penultimate race of the season, the Fall Nationals presented by $hameless Racing at Darlington Dragway. Adding to the sting of not qualifying was the fact that No. 2 in points Brian Bednar gained ground with a semifinal finish and contender Nick Hamilton won the race.

Farmer entered the World Finals presented by ProLine Racing and $hameless Racing at Virginia Motorsports with a slim lead over three championship contenders: Bednar, Hamilton and Jody Stroud. The latter two drivers fell in the first round, then Bednar lost in the second round in the pair ahead of Farmer, allowing the North Carolina driver to breathe a sigh of relief.

“I watched from the water box as [Bednar] turned the bulb red right in front of me,” Farmer said. “Before I even did my burnout I knew I was the champion. That was a really good feeling, and honestly, I was celebrating and I hadn’t even staged the car yet.”

With the championship sealed up, Farmer went on to the semifinals, where he lost to eventual race winner Michael White with a 3.879 on a 3.87 dial-in in the borrowed car.

“That twin-turbo car worked,” Farmer said. “Once we got it figured out, it printed tickets unbelievably well. It was deadly.”

Farmer and the other 2019 PDRA world champions will be honored at the annual PDRA Awards Banquet during the Performance Racing Industry (PRI) Show weekend in Indianapolis, Saturday, Dec. 14.