“AMALIE Motor Oil is excited to announce the continuation of our title rights sponsorship of the AMALIE Motor Oil NHRA Gatornationals,” said Rick Barkett, “We are fortunate to have one of the premier drag racing events in the world so close to our global headquarters in Tampa, Florida. The 50th anniversary Gatornationals this season was a huge success and we look forward to being an integral part of this great event for many more years.”

AMALIE Motor Oil has been involved in NHRA drag racing across numerous platforms through its presence in NHRA’s contingency program as well as its sponsorship of drivers including Top Fuel pilot Terry McMillen. This renewal will continue to build upon the partnership and provides AMALIE Motor Oil with opportunities to connect with NHRA fans including product placement, signage, interactive displays, media exposure and more.

“AMALIE Motor Oil is a valued partner to NHRA Championship Drag Racing,” said Brad Gerber, NHRA vice president and chief development officer. “We are extremely happy to continue our relationship with AMALIE Motor Oil as the title sponsor for one of our largest, longest running and most iconic events.”

AMALIE Motor Oil, one of the original “Pennsylvania Crude” oil companies, was founded in 1903 in Franklin, Pa. Today, headquartered in Tampa, Fla., with state of the art R&D and production facilities in Tampa, Charleston, and Los Angeles. AMALIE Motor Oil continues 100 years of excellence with a full line of premium racing, automotive, fleet, industrial, and specialty lubricants. For more information, log on to www.AMALIE.com. 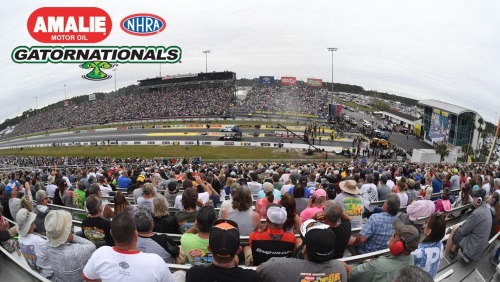