GLENDORA, Calif. (November 7, 2019) – NHRA announced today that Alaska Raceway Park, located in Palmer, Alaska, has signed on as a new Division 6 NHRA member track. Originally built in 1964, the multi-use motorsports park will become a member of the Northwest Division.

Alaska Raceway Park, owned and operated by Earl and Karen Lackey and Michelle Lackey Maynor, sits about 42 miles northeast of Anchorage, Alaska. As part of the track’s new agreement with NHRA, Alaska Raceway Park will be adding additional facility and safety features.

“The dragstrip has been there for 55 years and we just opened the NASCAR track in 2016. NHRA is the top name in drag racing and NASCAR is the top name in oval racing so it seemed like a good fit,” said Lackey Maynor. “We’re excited for the upcoming season. To get back to the fun part of racing. That track family atmosphere is kind of what we’re focusing on for this year.”

With a season that runs from Mother’s Day weekend until Labor Day, the track will host a slate of NHRA Summit Racing Jr. Drag Racing League events during the year. Racers will also have the opportunity to compete against other racers in the division for a championship “Wally,” the official NHRA trophy, at the Northwest ET Bracket Finals as well as through the Land of the Leaders ET Challenge Series.

“With one of the most beautiful settings a track could be located and a great group of racers, we’re very excited to have Alaska Raceway Park and its racers in the NHRA family,” said Matt Levonas, Division 6 director. 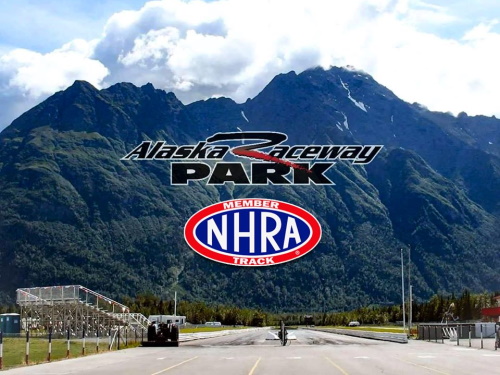