POMONA, Calif. (November 12, 2019) – Cruz Pedregon and team are motivated by a quarterfinal showing and two 300+ mile per hour runs to prove the same consistency in the upcoming final NHRA race of 2019. “Overall I believe we’ve been plagued by mechanical issues in the piston department. Chasing scuffing problems for more than half of the races made us feel like we had an anchor around our ankle. These issues meant we weren’t really able to show what our car is capable of,” says Cruz. “We resolved that in the last few races, but later found a problem in the clutch area where the surface of the disks weren’t as they should be and that hampered our motor situation.

“Together with Nick (Casertano), Jay (Ryskey) and the rest of the team, we have really worked our tails off to bring our car back to the high-performing quality it should be. We plan on showing in Pomona that we can finish strong and are heading in the right direction for the 2020 season…ahead of the curve, ready to go.”

Cruz says that part of that direction includes adding Eric Lane to the team, “he’s already helped some on the car and has great experience that includes the rebuilding of a race team. We appreciate the work Glen (Huszar) did for us over the season and wish him well.”

Before Pomona, Cruz shared on social media five color photos of his dad that were gifted to him by a fan that neither he nor his brother Tony had seen before. He says, “what an incredible gift to receive, especially the week we debuted a helmet that pays tribute to my dad.”

After Pomona, Cruz plans to spend time with his daughter Ryah before heading to the first-ever Riyadh Car Show in Saudi Arabia with the California Charger Nostalgia Funny Car and his 2008 NHRA Championship Nitro Funny Car November 21 – 26. Cruz has also hinted at getting back into dirt racing at the January Chili Bowl in Tulsa. 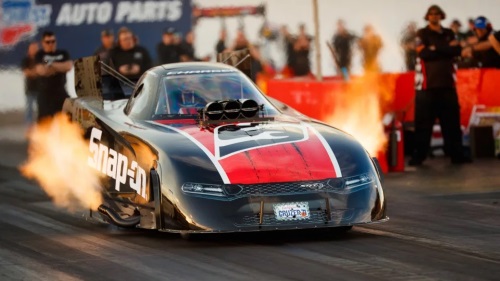 On the side of Cruz’s car

On the side of Cruz’s car this week you’ll see the name of Snap-on Nitro Franchisee Don Hart. Before selling tools, Don used them in his work on power plants in the area. He says he likes that there’s never a dull moment along his Snap-on route. When he’s not working, Don plays competitive soccer once a week. He got into the sport through his soccer-playing wife, Christine. She’ll be with him this weekend at the track along with their 18-month-old son, David.