POMONA, Calif. (November 15, 2019) – Erica Enders has always thrived in pressure situations throughout a standout NHRA Mello Yello Drag Racing Series career, and that’s once again been apparent in 2019. She’s also on the verge of the third world championship in Pro Stock, looking to finish the job in style at this weekend’s 55th annual Auto Club NHRA Finals at historic Auto Club Raceway at Pomona.

She takes a 92-point lead over Elite Motorsports teammate Jeg Coughlin Jr. into the final race of the Mello Yello Countdown to the Championship playoffs, taking full advantage of getting hot at the perfect time. She’s won two playoff races in her Melling Performance/Elite Motorsports Chevrolet Camaro, earning the 150th win for females in NHRA Mello Yello Drag Racing Series history along the way, meaning a third postseason victory would be the perfect capper to a third world title.

“Momentum is huge in this sport,” Enders said. “At the beginning of the year, we had some pretty deep valleys and we had to claw our way out of them. (Team owner) Richard Freeman has put us in position to do the best we can. Peaking at the right time is crucial. We’re going to go out to Pomona to win the race. We’re going to dig deep and I’m excited about the opportunity.”

Steve Torrence (Top Fuel), J.R. Todd (Funny Car), Tanner Gray (Pro Stock) and Matt Smith (Pro Stock Motorcycle) were last year’s winners of the race that will be televised on FOX Sports 1 (FS1), including live finals coverage starting at 4:00 p.m. (ET) on Sunday, Nov. 17. It is the final race in the Countdown to the Championship playoffs the last of 18 races in the 2019 Pro Stock season. Enders has finished the season in style, but the work isn’t done yet.

She holds all the momentum and a sizable lead, but Coughlin, a five-time world champ, has a flair for the spectacular as well. He’s won six times in Pomona, while Enders still faces challenges from the likes of 2017 champ Bo Butner (113 points back), multi-time champ Jason Line (116 points out of first) and Matt Hartford (118 points back). All would need near-miraculous finishes to slip past Enders, but Coughlin isn’t closing the door on another world title. More than anything, though, he’s seeking his first playoff win since 2013, which would give him plenty of good vibes entering the off-season.

“We had a decent regular season and we’re doing a bit better in the Countdown to the Championship but there are areas where we feel we could have done more,” said Coughlin, who has one win this year and 62 in his career. “You can always find those moments where you just weren’t as strong as you needed to be and had rounds you could have won but didn’t; that’s just the way this sport goes. Things are pretty simple, now, just finish as strong as we can and see where everything ends up.”

Enders, who has 25 career wins, is determined to finish in the top spot, thanks in part to dominant runs through qualifying in the playoffs and victories in St. Louis and Las Vegas. She’s been the No. 1 qualifier at three of the five playoff races – and second at the other two – riding a wave of momentum after some early-season struggles.

Her team, led by crew chiefs Mark Ingersoll and Rick Jones, are riding high now, leaving the team determined to finish big in Pomona. Enders’ first championship included her lone win at Pomona to clinch the title. That came under in ultra-intense pressure situations, but Enders knows there’s nothing better than finishing off a championship with a victory at the historic facility. 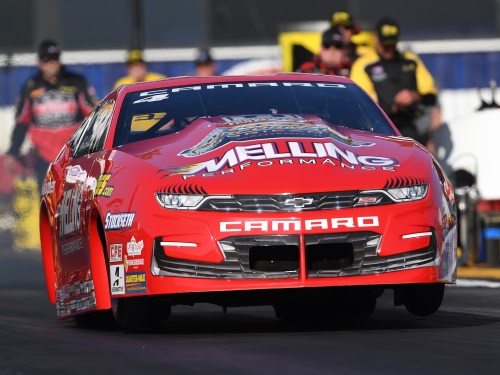 “My guys just keep giving me a really good racecar,” Enders said. “Jeg is a legend for a reason and, in my opinion, the best driver I’ve ever seen. I’m humbled to be his teammate and drive alongside him. We’ve been in these situations before and I feel like it’s something we’re good at. Everything we’ve worked for comes down to this event and what a position to be in. You’ve got to expect great things and I can confidently say we’re very prepared leading up to this point.”

It’s shaping up to be a thrilling duel in Top Fuel, as defending world champ Steve Torrence holds a slim 16-point lead on 2017 world champ Brittany Force, who won in Las Vegas. Doug Kalitta is 55 points and still in contention as the veteran is after his first career world title.