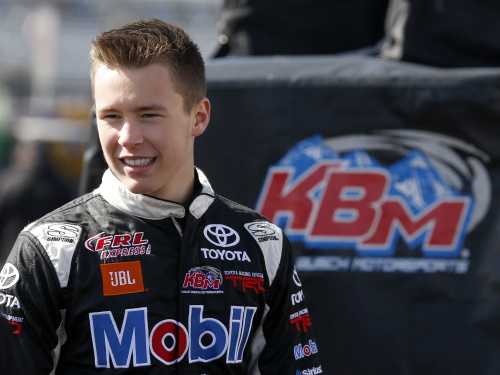 Miami, FL. (November 15, 2019) – Raphael Lessard Racing announced today that the young Quebec driver will compete in the 23 events of the 2020 season in the NASCAR Gander Outdoors Truck Series (NGOTS). He will drive the Toyota Tundra No 4 truck prepared by the leading team in the series, Kyle Busch Motorsports (KBM). Raphael Lessard is once again making history by becoming the second Quebecer and the youngest full-time Canadian driver ever in the prestigious NASCAR Truck Series. The 2019 was a turning point for Raphael Lessard, and 2020 will be the first stage of his full-time professional career in motor racing at the senior levels.

“We’ve watched Raphael grow as both a driver and a person since joining our Super Late Model program in 2018 and we’re looking forward to being a part of his continued progression as he graduates to a full-time role in the Gander Outdoors Truck Series next year,” owner Kyle Busch said. “Similar to Erik Jones and Christopher Bell before him, Raphael joined our Super Late Model program and immediately won some big races. Then, when given a part-time Truck Series schedule, they all proved capable of running up front and earned the right to compete full time. Erik and Christopher went on to win races and a championship in trucks, now Raphael has the opportunity to continue to follow their blueprint.”

During the 2019 season, Raphael Lessard competed in three NGOTS events with KBM: Martinsville Speedway (Virginia, USA), Dover International Speedway (Delaware, USA) and Bristol Motor Speedway (Tennessee, USA). The results achieved at each truck race and in other series (races and private test sessions), impressed the specialists, particularly at KBM for which he drove during three test sessions, including in a car to be raced by Kyle Busch himself in preparation for a prestigious Super Late Model race. It is unusual to see a young driver inspire such confidence in a top-notch team and, given the results, KBM quickly approached Raphael Lessard for the 2020 season in NASCAR trucks. 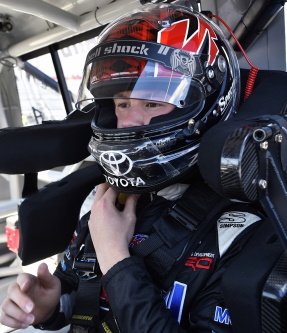 “Raphael has continued to prove himself as an outstanding race car driver,” said Jack Irving, Senior Manager, Commercial Director, Toyota Racing Development. “He has shown poise behind the wheel and has achieved solid results in the opportunities he’s been presented with thus far.

We look forward to watching him grow and achieve even more with this full-time opportunity in 2020 behind the wheel of a Kyle Busch Motorsports Tundra.”

Raphael Lessard will do everything possible to exceed the objectives set for him by TRD and KBM. Since the age of 11 – and even before – Raphael Lessard has been preparing to perform in the highest levels of NASCAR. From daily physical training to simulator and on-track time, his days are committed to his motor racing career.

“I’m so happy as we’ve worked very hard in recent years to become part of the Kyle Busch Motorsports team and secure a full-time ride in one of the three top NASCAR series. It’s incredible, a dream come true! I can’t thank Kyle and the whole team at KBM, Toyota and TRD enough for the trust they put in me. This would not be possible without the support of my parents, and all those who made this dream come true,” commented a very excited driver.

“I can’t imagine how much of an experience it will be for me to travel so much next year to cover the 23 races, discover new tracks, work with the same team members every time out. I am sure that our effectiveness and communications will improve and make for better setups and race strategies. I’m going to also focus on being more efficient in everything I do on and off the track, I can’t wait!” added the driver who becomes the youngest Canadian ever to do a full season in the NASCAR Gander Outdoors Truck Series.

Since debuting in 2010, Kyle Busch Motorsports (KBM) has quickly established itself as one of the most successful teams in all of NASCAR. Owned by 2015 Cup Series champion Kyle Busch and fueled by his passion for winning, his organization holds the Gander Outdoors Truck Series records for most team wins (75) and most team wins in a single season (14 in 2014). In addition to collecting a series record six Owner’s Championships, the organization has produced two championship-winning drivers; Erik Jones (2015) and Christopher Bell (2017).