POMONA, Calif. (November 15, 2019) – After an incredible run through the NHRA Mello Yello Countdown to the Championship playoffs, there’s only one thing left for Erica Enders to do heading to this weekend’s NHRA Finals in Pomona: win a third world championship.

Enders is on the verge of accomplishing something great, holding a 92-point lead over Elite Motorsports teammate Jeg Coughlin Jr., but the standout driver is determined to finish the job.

Her win in Las Vegas gave her two playoff victories, but Enders knows the job isn’t done until the championship trophy is in her hands.

“We’re sitting in the best position out of everyone, and I’m excited and hopeful and optimistic, and all of those good things,” Enders said. “I want to do the best I can and I want to win a third world championship. There’s no reason it can’t happen.”

Enders certainly has the inside track after a historic win in Vegas. It was her 25th career win, the 150th victory for females in NHRA Mello Yello Drag Racing Series history and the 200th win for the Chevrolet Camaro.

It puts Enders on the precipice of a third world title in her Melling Performance/Elite Motorsports Camaro, and she has big goals heading to Auto Club Raceway at Pomona.

The points-and-half system in play at the finale opens the door for a lot of wild scenarios, but Enders can end all of those with a third playoff win in 2019.

“Our goal is to clinch (the championship) and win the race,” Enders said. “There’s definitely a lot at stake, but we welcome the challenge.”

Returning to Pomona with a championship on the line also takes Enders back to 2014 when she won the first of her back-to-back titles. That one came down to the absolute wire, as Enders and Jason Line faced off in a winner-take-all final round.

Enders took that round victory, the event win and the championship all in one, performing with an unwavering confidence amidst a series of high-pressure moments, and it’s a scene that will come to mind heading into the weekend.

“Having Jason run in front of us every single round and having to counter with a win ourselves to stay in the lead, talk about pressure. It was so intense that day,” Enders said. “The nerves and feelings were so intense, but we just went up there and did what we needed to do. It’s coming down to the same deal, so I’m excited for all of those feelings this weekend.”

In many ways, this year’s run through the playoffs has reminded Enders and her team, which is led by crew chiefs Rick Jones and Mark Ingersoll, of the first title season.

Enders is determined to finish the job this time, too, after working through considerable adversity earlier in the year. 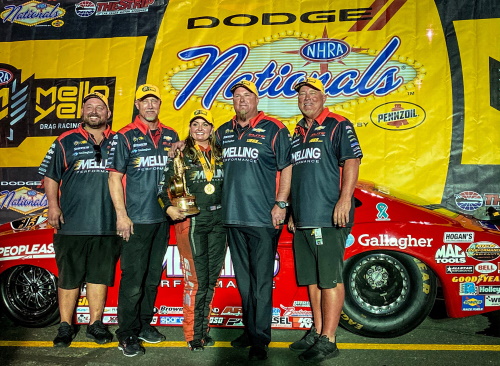 The team pushed through that and is peaking at the perfect time. Enders has been dominant in qualifying, taking the No. 1 spot at three of the first five playoff races and earning the second spot at the other two.

It’s set an impressive pace at every event and now Enders hopes to finish the job and claim a third championship.

“We’ve struggled at times this year, but it all came together when it was supposed to,” Enders said. “Winning a championship this year would mean a whole lot because of what this group has been through together. It’s just made us stronger.

“All the bonus points we’ve accumulated in qualifying have helped us substantially, and having a great car underneath you gives you confidence. What we’ve done just speak volumes about what this team is capable of.”

Mello Yello Drag Racing Series qualifying will feature two rounds at 12 and 2:15 p.m. PT on Friday and the final two rounds of qualifying on Saturday at 12:15 and 2:45 p.m. Final eliminations are scheduled for 11 a.m. on Sunday.

For more information, go to http://www.elitemotorsportsllc.com/