Pritchett and Hagan No. 1 on Friday

Behind the wheel of the MOPAR Dodge Charger SRT Hellcat Widebody, Hagan captured the No. 1 spot with his Q2 run of 3.872 seconds at 333.58 mph. Before he rocketed to the provisional lead in Q2, the two-time Funny Car world champion kicked off his campaign for a sixth Pomona trophy and third world championship by wheeling his 11,000-horsepower machine down the track in 3.900 seconds, which held up to be low E.T. of Q1. 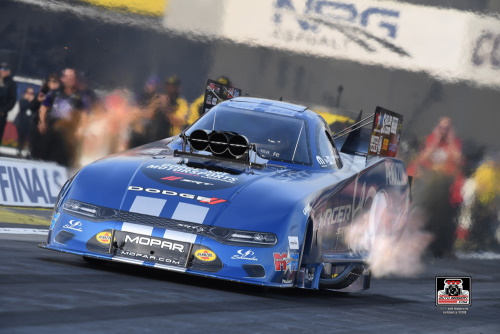 Not only was Hagan the quickest Funny Car pilot of both qualifying sessions on Friday, but the MOPAR Dodge Charger SRT Hellcat Widebody was the only flopper to make two full pulls, continuing the momentum of success Hagan and the Dickie Venables-led team have enjoyed as of late.

“We’ve had a great car these last few races, it’s been running strong, and we’ve been able to capitalize on that, and capitalize on the points today,” said Hagan, who moved into championship contention by scoring back-to-back wins at the previous two events. “Dickie Venables, (assistant crew chief) Mike Knudsen, (car chief) Alex Conway and all my guys are really putting a great race car underneath me.”

Hagan entered the race weekend ranked third in the Funny Car point standings and 56 points behind leader Robert Hight. By hurtling to the quickest time of both sessions, Hagan earned eight bonus points, narrowing the margin between him and Hight, and more importantly, preventing Hight from adding to his point total and extending his lead.

“It’s exciting, I don’t really feel any added pressure,” explained Hagan of chasing the championship. “I’ve been in Robert’s position before, and I know how it feels to have a target on your back, but my mentality right now is to just have fun and enjoy it. Robert is going to focus on Robert, and we’re going to focus on ourselves. That’s the biggest thing that I’ve learned over the past 10 years driving for Don Schumacher. You’ve got stay in your lane and focus on what you can control, and the rest will take care of itself.

“I think it would be hard to not have confidence after coming off of two race wins, and going No. 1 here and low of both sessions, but it can all change quickly. These cars are very humbling, and you just never know, but I have all of the confidence in the world in my guys. You can see the hunger in their eyes, knowing we have a shot at (the championship). 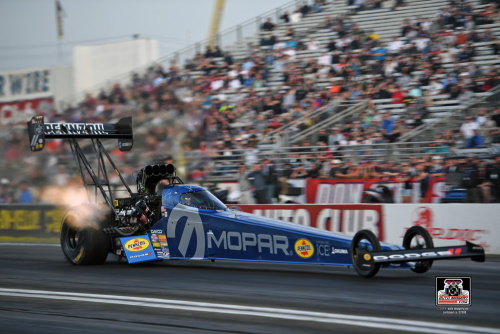 In Top Fuel, Leah Pritchett catapulted to the head of the class when she navigated her MOPAR Dodge Top Fuel dragster down the Auto Club Raceway at Pomona dragstrip in 3.694 seconds in Q2. Just like her Funny Car teammate, Pritchett’s machine has been on a tear lately. At the previous event on tour, Pritchett nabbed the Top Fuel pole and used her No. 1 qualifier to help maintain her ‘top five’ ranking.

“That pass felt phenomenal,” said Pritchett, a 12-time No. 1 qualifier. “It was extremely smooth. I think more than anything was getting past that cautious zone, that 250-foot mark, and at the 330, we were pulling really hard. I know it’s been a tricky track. The prep has been a little different, and it’s been a real challenge for everybody. To see the continuous communication between (crew chiefs) Todd (Okuhara) and Neal (Strausbaugh) and being the second pair of the session makes it even more challenging. We thought a 3.67 was out there with the settings in the car, and the 3.69 felt just fine.”

While mathematically, she is no longer considered a solid threat to contend for the 2019 championship, Pritchett’s current focus is on closing out her season with a No. 1 qualifier and a win at her home track.

“This place means everything to me,” said the Redlands, Calif. native. “Everything about it screams home. From the fans to the stands to the track itself. We are just out here running our race. Everyone else seems to be caught up in the points. Tomorrow is going to warmer, so we feel like that time is going to be hard to beat, but we know out here anything is possible. For now, we are just going to enjoy those four qualifying points.”

Pritchett is seeking her 13th No. 1 qualifier, and Hagan is eyeing his 36th.