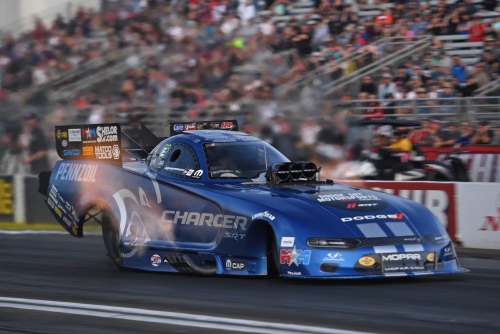 Hagan surged his way to Pomona coming off consecutive Funny Car wins in Dallas and Las Vegas. The 2011 and 2014 champion continued his late-season push topping qualifying in both sessions Friday behind the wheel of the Dodge Charger SRT Hellcat Widebody, with quickest pass of 3.872 seconds that held up through Saturday qualifying. He collected a total of 10 qualifying points and an additional two points for final position to close the gap from 56 points behind the leader to trailing by only 44 when eliminations commence Sunday. The three-time Auto Club NHRA Finals winner will face Jonnie Lindberg in the opening round.

“There’s a lot of confidence in our team,” said Hagan, after earning his 36th career No.1 position. “Starting from the No. 1 spot is huge, it sets the tone for the whole day. We’ve got a great race car, and I feel really confident about all of the decisions they’re making in the lounge and how it’s performing on the race track. I’m hungry for it; all of us out here live to be in this position where you have the opportunity to win a world championship.” 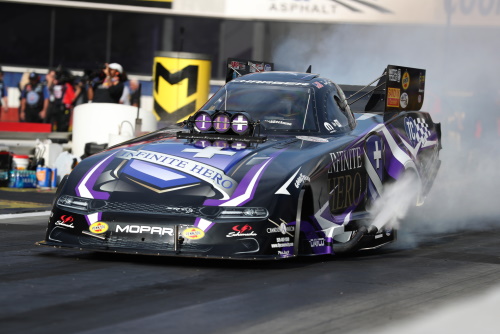 Fellow Mopar-powered Funny Car driver Jack Beckman is also within striking distance of earning his second NHRA Funny Car championship. Beckman opened and closed qualifying with stout runs aboard the Infinite Hero Foundation Dodge Charger SRT Hellcat Funny Car of DSR. He earned three qualifying points in Q1 and topped the field to close qualifying Saturday afternoon putting him into the second qualifier position and earning four additional bonus points. Entering Sunday, he trails the leader by 38 points and begins his quest for his second world title facing off with John Hale in round one.

Tommy Johnson, Jr., the 2016 and 2017 Auto Club NHRA Finals champion, qualified the Make-A-Wish Dodge Charger SRT Hellcat Funny Car of DSR seventh. Ron Capps, pilot of the NAPA Dodge Charger SRT Hellcat Funny Car, claimed the eighth position on the ladder and will begin his quest for his first season-ending victory with a round one matchup versus fellow Dodge//SRT driver Cruz Pedregon. 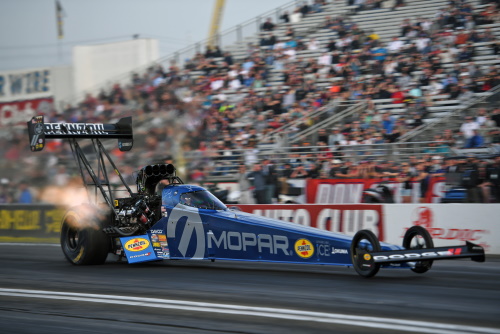 DSR Top Fuel star Leah Pritchett captured the No. 2 qualifying position driving the HEMI®-powered Dodge//SRT dragster. Pritchett left the last race in Las Vegas mathematically still alive for the Top Fuel championship. The southern California native is looking to close out the 2019 season with her second victory of the campaign and is in good position following qualifying. She drove to quicker E.Ts than any other driver during the opening three rounds of qualifying with a pass of 3.654 seconds. Despite being bumped from earning her second straight No. 1 qualifier on Saturday, she is confident her Mopar team will be ready for their first-round matchup with Scott Palmer.

“I feel no pressure right now. It’s Robert’s to lose. He’s leading, and he’s got to maintain his lead, but that’s why you race on Sunday because you just never know. I’m excited about it; I feel really confident in my team, and I know they’re going to put a great race car underneath me, and I’m just going to drive my ass off, and we’ll see what happens. (Crew chief) Dickie (Venables) races smart, and that’s the reason we’ve won so many races together as a team. He races the race track, and he’s not ego-driven, trying to throw down all of the time. He’s a racer at heart, and I love that about him.”

“Making it down the track in that last qualifying session was huge for us. We had only made it down the track in Q1 and we still haven’t made it down the right lane. There’s something about Pomona. It took everything I had to get the car down the track. I was able to peek up at the scoreboard and I can tell you that’s exactly what the doctor ordered for the Infinite Hero Foundation team heading into tomorrow. It’s all right in front us. I’m really excited about the opportunity we have.”

“Making three good qualifying runs is a great way to position ourselves for Sunday. We were a little bit quick on Q1, but proved to be fast learners by going out in Q2 and running low for the session. We picked up some qualifying bonus points Friday night and Saturday afternoon. We were aiming to get more in that final session, but we had some mechanical issues hold us back. Going into race day No. 2, we have a great chance. This team is full of proven winners at this track and I feel the same way about tomorrow. Winning tomorrow would be a perfect way to round out our first season with this group together and we’re going to do everything we can to accomplish that. It all starts with the first round and all that matters is getting to the finish line first.”

“The track conditions have been tricky this weekend, but it’s nice having a consistent car. We have a really good Dodge Charger SRT Hellcat for the conditions we will be racing in tomorrow. This has been a really good race for us in the past and if we can string together some 3.90s tomorrow, I feel like we have a great chance of making it to the final for the fifth consecutive year.”

“We feel better about chances after Q4. We talked about it in Las Vegas that it happens to the best of teams. We lost our way a little bit. I couldn’t be prouder of (crew chief) Rahn Tobler and this NAPA Autocare team. Sometimes it takes teams a lot runs and races to figure out what your car is doing and what went wrong, but these guys did a great job figuring it out in short amount of time. That last run was what we wanted. There are a number of scenarios that can play out tomorrow. We are in it to make our teammates proud. If we can help we will. We’ll just go out and try to win the race. We’re just trying to end the year with the best finish we can.”