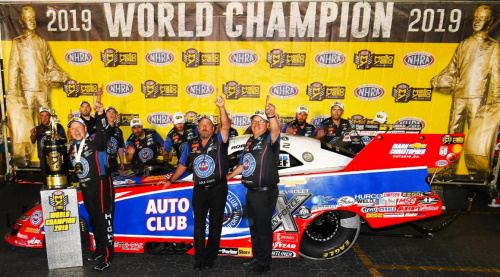 “It’s unbelievable. To win six races from start to finish, lead the points from start to finish which has been a dream of mine since the Countdown Era, and with the competition level in Funny Car, this is by far the championship I’m going to cherish the most because we earned it. We did our job. This has been the steadiest year I’ve ever had and that’s a real tribute to the Auto Club team and Jimmy Prock and Chris Cunningham. It’s amazing. I’m the luckiest guy in the world to drive this Funny Car,” Hight said. “What’s amazing is not that you win more than two championships but that, that puts you in a real elite group. To be among big names like Raymond Beadle, Don Prudhomme, John Force, Kenny Bernstein and then you add my name to that list, it’s almost like it doesn’t belong.” 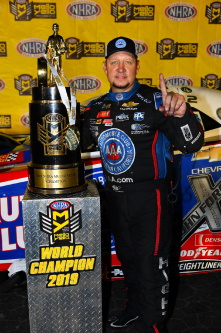 By the time Hight entered the finals, he only needed to ensure he did not pick up any sort of penalty to clinch the victory. After an epic, crowd pleasing, long burnout, Hight wasn’t able to back the car up giving Beckman a solo run to the race win. En route to the championship victory, Hight entered race day qualified fifth for the Finals, a position that had him facing team owner John Force in the first round. Hight would end the legendary driver’s quest for a 17th championship with the quickest pass of the session, second quickest of the day, 3.945-seconds and 327.82 mph that bettered Force’s 5.234 at 141.97 after tire smoke. In the second round, Hight defeated Shawn Langdon with a 3.976-second pass at 324.75 mph.

In the semifinals, Hight would face championship contender Matt Hagan. Hight powered his Auto Club Camaro to a 3.977-second pass at 324.59 mph outrunning Hagan’s 4.014 at 326.95. The bid into the finals would set Hight up to only need to not be penalized in the finals, meaning as long as he did not cross the center line, hit a cone or the wall or oil down the race track, he would become the 2019 champion. Despite not making the pass, Hight was not penalized and had enough of a points lead to take the 2019 Funny Car title. 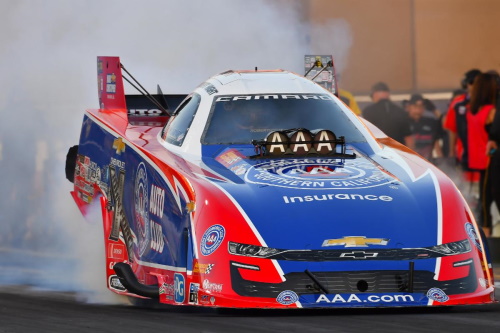 “It was a wild and crazy weekend. It started with qualifying, going into the last session in the bottom half and you don’t want to do that here in Pomona. This place is very tricky and you really need lane choice so, my guys did a really good job last night at making a real decent run but then we had to go race the boss whose had the best car since Seattle,” Hight said. “He wanted to win a Championship. You never know when these opportunities are going to come around again. There are no guarantees so we had our work cut out for us but we got the win and got to race Shawn Langdon next round.

“He’s a great leaver and the cars been running good, and we get by that but then it’s the most important run of my life, the semifinals against Matt Hagan. I’ve thought about this before. Sometimes it comes down to one run to win a championship and you think how will you perform; will you choke, will you get the job done and you don’t really know until you get there,” continued Hight. “My heart was beating out of my chest when I was staging the car and we got it done. Not to say next time, it won’t go another way, but this time we got it done and I really look at it like it would have really be a shame to lose the championship after the season we had.”

Hight ends his 2019 NHRA Funny Car world championship season with a career best six race victories and eight No. 1 qualifiers. It is the third consecutive year Hight has finished inside the top three. In 2018 he was No. 2 and in 2017 he won his second championship. 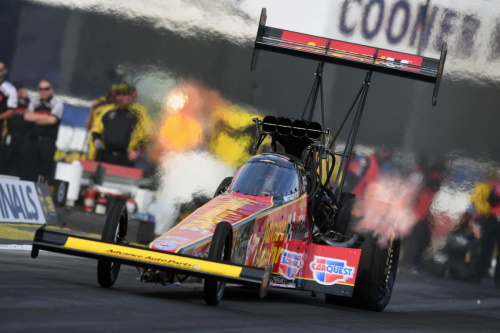 Brittany Force and the Advance Auto Parts team opened race day with a round one victory over longtime rival Antron Brown. After both drivers lost traction down track, Force would hold on for a 4.075-second pass at 218.41 mph and the win light to upset Brown’s 6.601 at 114.89 mph. In the quarterfinal, Force would find herself racing against eventual 2019 Top Fuel world champion, Steve Torrence. It was a close side-by-side drag race with Force powering to 3.776-seconds at 302.41 mph but it wouldn’t be enough to advance past Torrence’s 3.749 at 326.48.

“It’s been an absolutely incredible season looking back from the start with this team. New crew chiefs with David Grubnic and Mac Savage, and the Advance Auto Parts team. We had a lot of change coming into this season to adjust to and get in the playing field, and we found it pretty quickly,” said Force. “Five races out in Houston, we got our first win together and you know, we fell off and struggled a little bit but then, when it mattered most, once we got locked in that Countdown, we really stepped up our game. We won in Vegas, went to the semis a few times and had some success out here this weekend.

“We came up short of the championship, but to have been here in the hunt for the Top Fuel title today is all I can ask for. I’ve got to give it up for every single one of my guys,” continued Force who holds both the national elapsed time and top speed records in Top Fuel. “They are the hardest workers. They’ve had my back throughout this thing; this entire season, especially during the end. I wouldn’t want to go into this fight with anybody else. We didn’t get it done, but we will be back next season.” 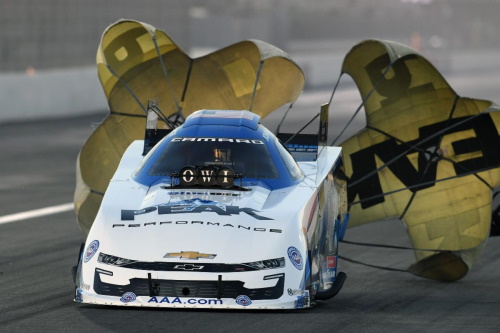 John Force and the PEAK Coolant and Motor Oil Chevrolet Camaro SS team had an early ending to their 2019 season when they were matched up against teammate Robert Hight and the Auto Club Chevy team in the first round of eliminations Sunday. Force, who looked to be on a solid pass, lost traction and his bid for an unprecedented 17th Funny Car world championship title at the 300-foot mark to make a 5.234-second pass at 141.97 mph falling short to Hight’s solid 3.945 at 327.82.

The 43-year racing veteran wraps up the season with two wins including a historic 150th career victory at the Northwest Nationals and a bucket list win at the U.S. Nationals, two runner-up finishes, and five No. 1 qualifiers.

“Today didn’t go my way as a driver to try and win another championship but as a team owner, of all these teams, I’m really proud. Brittany finishing third in the points and Austin, we’re going to live with Austin’s program for months to come because its right there and that team will turn a corner and we’ll have two great Top Fuel cars,” Force said. “Robert winning the championship, that’s why we came. We can’t win them all. I can’t win them all but we win some. I’m really excited. Chevrolet and Auto Club, all our sponsors have to be really proud of Robert. He did a burnout that was world famous there at the end, and we’ll see where it goes from there.” 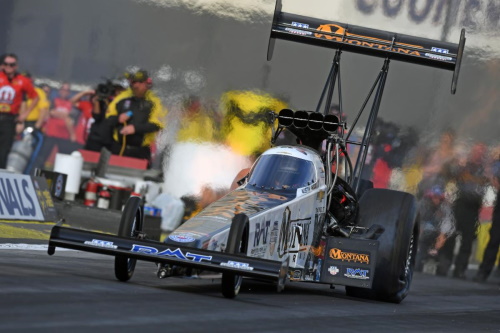 Austin Prock had an early first round exit Sunday when he went face-to-face with fellow Auto Club Road to the Future Award candidate, Jordan Vandergriff. With almost identical reaction times, Prock with a .041 light and Vandergriff with a .049, the third-generation racer smoked the tires in his Montana Brand / Rocky Mountain Twist dragster to run 4.140-seconds at 245.09 mph to be defeated by Vandergriff’s 4.140 at 245.09.

“This wasn’t the day we wanted, you know, to end our season off but we had a great season. I couldn’t be more proud of what we’ve accomplished in the short amount of time we’ve been together so, hats off to all the guys for busting their butts all year long and giving me a shot to compete for wins and turn on win lights,” said Prock who ends his rookie season with one win from the Northwest Nationals, five semifinal appearances, a career best time of 3.688-seconds and top speed of 334.40 mph. “I’m extremely proud of these guys. There’s nothing to hang our heads about after today. Its drag racing. You’re going to get beat sometimes and it’s all about how you rebound. We’re going to have a good, long off season to work on our race cars and come into Phoenix test with a fair shot. I think this Montana Brand / Rocky Mountain Twist car will be one to beat next year.”

Prock concludes his rookie NHRA season with his first win and a top 10 finish with his first-round exit landing him in the No. 8 spot to finish out 2019.

The conclusion of the 2019 NHRA Mello Yello Drag Racing Series season is capped off by the NHRA Awards Ceremony hosted at the Ray Dolby Ballroom at Hollywood and Highland Monday night where the champions and special award winners will give their speeches and celebrate a successful season.