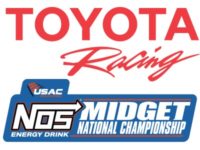 Scelzi becomes the third different Tucker-Boat Motorsports driver and the 15th Toyota-powered driver to win a national event this season. The win is Toyota’s 42nd national midget feature win of the year, an all-time high for the manufacturer.

Scelzi opened the night’s action by qualifying fifth in the 56-car field, but was then forced to win his Last Chance Qualifier after finishing fifth in his heat race. He did just that to earn a starting spot on the outside of the front row for the A Main.

Scelzi, the 17-year-old son of drag racing legend, Gary Scelzi, went straight to the front on the green flag, followed by pole-sitter Colwell, Michael Pickens, Shane Golobic and Tanner Carrick. The top three continued to hold down those positions until lap eight, when Pickens and Logan Seavey got together fighting for third and Pickens came to a stop to bring out an early caution flag.

Scelzi continued to dominate at the green flag, with Colwell, Seavey, Carrick and Golobic running in the top five through the midway point when the yellow flag waved once more. Behind them, Kyle Larson was on the rise, climbing from 23rd to 12th by lap 15.

Defending series champion Seavey made a move past Colwell on lap 19 and then set his sights on the leader, closing right up on Scelzi before another caution came out with nine laps remaining.

As he had most of the evening, Scelzi excelled on the start and was able to pull out a couple of car lengths lead on Seavey. As the top two battled it out front, Larson continued to climb through the field, moving into seventh on lap 25 and up to sixth on the following circuit.

On lap 28 the final yellow flag of the night waved, setting up a three-lap dash for the win. Scelzi would prove to be more than up to the task, driving to his first national midget feature victory ahead of Seavey and Colwell, with Larson climbing up to take fourth.

Carrick would finish eighth, followed by Jason McDougal in ninth and Aaron Reutzel in tenth as Toyota-powered drivers captured seven of the top-10 finishing positions.

The two-night Hangtown 100 will crown its overall champion following Wednesday night’s feature at Placerville Speedway. The event features the richest purse in USAC Midget car history with $5,000 going to Scelzi for his win tonight, $20,000 to win on Wednesday and a $12,000 prize going to the top overall driver in points throughout both nights.