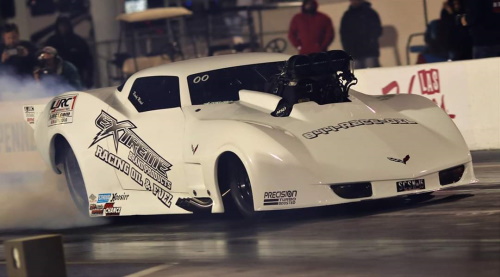 Ed Thornton, the current No. 2 qualifier in his ’70 Camaro, went a different route, shooting for the speed record and just missing it after laying down a pass of 273.16 mph (5.604 seconds). Temperatures stayed in the mid-50s for most of the day under clear skies, making for incredible passes in every class. Ronnie Hobbs used the conditions to crush the Radial vs. The World field during the second qualifying round, running a 3.810-second pass at 203.23 mph in the eighth mile in his 2017 Mustang.

“This is what the Street Car Super Nationals is all about,” said event promoter Mel Roth. “We’ve got some of the best racers around with an amazing track crew under perfect weather conditions? Yeah, this is not the year to miss this event!”

SCSN 15 is available to watch free all weekend at BangShift.com by clicking HERE.

In a $5,000 grudge race between Jermaine Boddie and Gilly Bobby Hildebrand later in the night during Hughes Performance Big Tire No Time trials, Hildebrand took the victory after fighting a careening race car down the eighth mile in a thrilling side-by-side race. Hildebrand’s car was tuned by Steve Petty, who knows a thing or two about SCSN, having won here multiple times with former NHRA Pro Mod champion Troy Coughlin.

Other top qualifiers from Friday were: