LAS VEGAS (November 24, 2019) – Saturday was a day of ET assaults and surprise runs at the COMP Cams Street Car Super Nationals 15 Presented by FuelTech. Qualifying at The Strip at Las Vegas Motor Speedway wrapped up Saturday afternoon with the first round of eliminations beginning immediately after. Opening ceremonies included both the American and Canadian National Anthems, an annual show of respect to the large contingent of racers from the Great White North who compete here season after season.

“It’s Old Home Week every year,” said event promoter Mel Roth. “Some of these racers, especially our Canadian ones, this is the only time I get to see them all year. It’s so much fun to hang out with such a diverse group of racers and to see the real camaraderie that exists in these pits!” 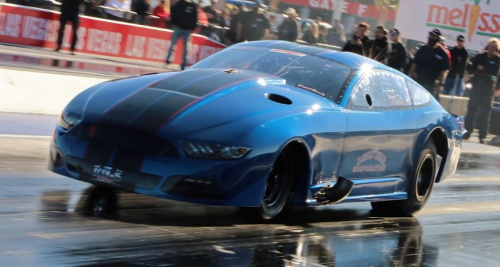 Ronnie Hobbs and his ’17 Mustang continued their hot streak with a 3.736-second run in E1 of Crower Radial vs. The World, beating his own qual-topping ET of 3.766 seconds set earlier in the day. The pass also set a new event radial tire record.

In Precision Turbo Pro Mod, Randy Merick’s 5.55 flat from Friday night was felled in dominating fashion by Justin Jones. Jones raced his 2018 Corvette to a blazing 5.518-second lap at 259.71 mph, more than enough to gain top qualifier honors. Both Merick and Jones would advance to E2 on bye runs, with Jones losing traction early and wisely lifting to save his car during his pass. 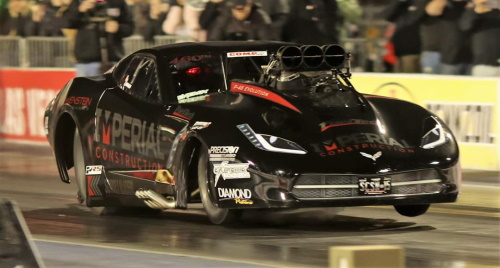 One of the most entertaining pairings of the day occurred in the first round of No Time Big Tire when Gilly Bobby Hildrebrand and Joe Loch engaged in an old-fashioned burndown. For well north of a minute, the two cars remained motionless on the line. Loch finally broke the stalemate and staged first. Unfortunately, Hildebrand crossed the finish line first, taking the win light.

Hildrebrand, entered in multiple categories, also laid down a 3.935-second lap at 200.65 mph in a winning effort in MagnaFuel Outlaw 10.5 eliminations Saturday night. In addition, the time resets the class ET record.

All schedules, ladders, and qualifying and eliminations results are posted at the COMP Cams Street Car Super Nationals 15 Presented by FuelTech at Facebook.com/StreetCarSuperNationals.

Eliminations continue Sunday with on-track activities scheduled to kick off at 8 a.m. local time (PST). The event can be watched via live, free streaming at BangShift.com by clicking HERE.