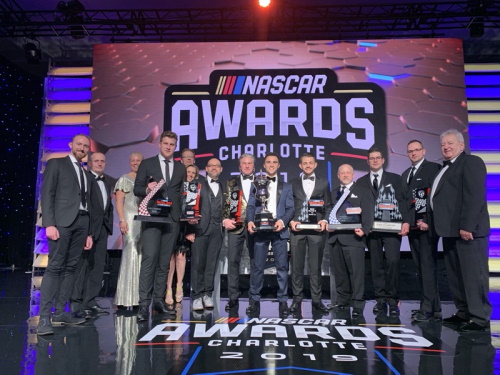 (November 28, 2019) –  Coming from all over Europe to celebrate the 2019 season, Euro NASCAR drivers, teams and officials had a unique night at the NASCAR Awards on November 23rd in the NASCAR Hall Of Fame.

After putting his name in the Whelen Hall Of Champions as the youngest ever Euro NASCAR Champion on Thursday, 22-year-old Loris Hezemans received his championship ring from NASCAR’s Chief Racing Development Officer Steve O’Donnell at the NASCAR Awards on Saturday.

“It has been an incredible experience to be part of this ceremony,” said Hezemans. “There were probably more than 1000 attendees at the Awards who enjoyed a big and well organized event. Everything just flowed so smoothly. For me it was great to experience how open everybody is, from Xfinity Series drivers to the Late Model racers. Everybody is respecting each other. You really have the sense of being part of the big NASCAR family, which we truly are!”

Hendriks Motorsport was also honored for fielding the most successful car in the 2019 NWES season, the #50 Hendriks Motorsport Ford Mustang driven by Hezemans and Giorgio Maggi. Both drivers and team manager Roy Hendriks went on stage to collect their prize. Also making the trip to Charlotte, Lasse Soerensen got his reward for winning the 2019 EuroNASCAR 2 championship with DF1 Racing. The Dane also grabbed the Rookie Trophy win.

“It was a huge event and it was great to be a part of it,” said Soerensen, who received the EuroNASCAR 2 championship ring. “I had a wonderful time in Charlotte and realized how big NASCAR is. I want to thank all the people supporting me for making this possible and of course the NASCAR Whelen Euro Series organization for putting together such a great championship.”

Memphis Racing from Sweden also sent their champions to Charlotte: while Ian Eric Waden celebrated his win in the Legend Trophy, Henri Tuomaala was honoured for being the best Challenger Trophy driver in the 2019 EuroNASCAR PRO championship. Also part of the NASCAR Awards was Myatt Snider. The American was strong in his European NASCAR debut in 2019 and recently signed a contract with Richard Childress Racing for a program in the NASCAR Xfinity Series.

The NASCAR Awards were the culmination of three days of celebrations for the Euro NASCAR delegation. The European group, made of drivers, team members and officials, had the unique opportunity to enjoy Rick Hendrick’s private car collection and his NASCAR workshop hosting mythic teams # 48 – 24 – 9 and 88. The delegation then visited the Charlotte Motor Speedway, the home of the popular Coca-Cola 600 and Roval races before enjoying a unique party at the NASCAR Hall Of Fame.

After the winter break, the 2020 NASCAR Whelen Euro Series season will kick off on April 25-26 in Valencia, Spain. The new season will for sure provide another epic battle for all the Euro NASCAR titles and Trophies and the honour to be rewarded at the NASCAR Hall Of Fame. 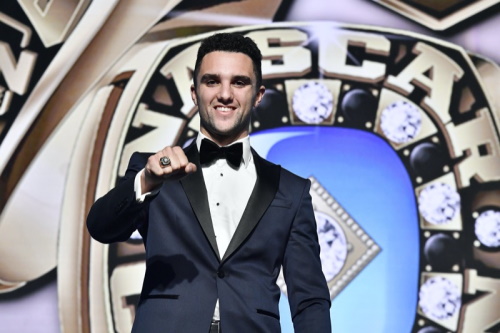 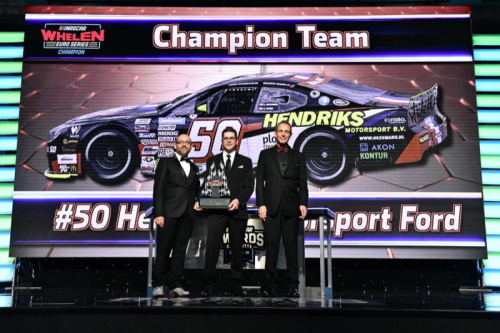 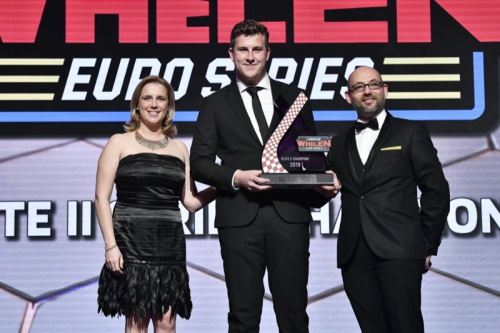 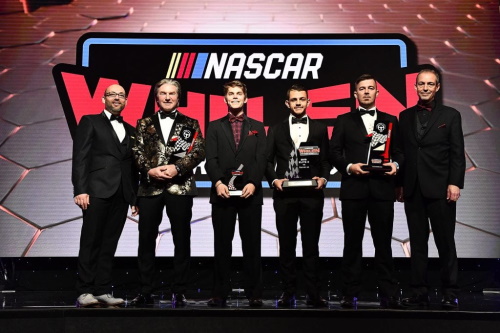 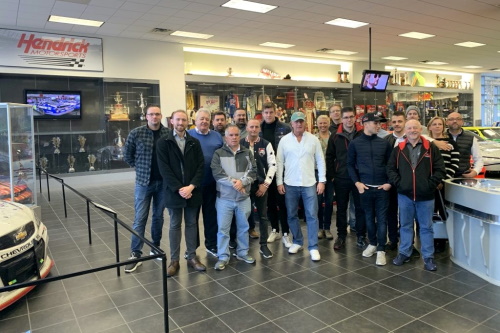