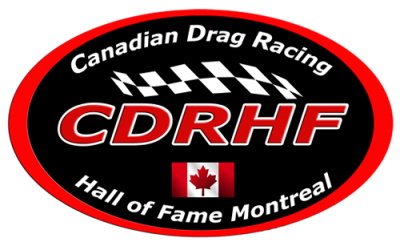 MONTREAL, Que. (November 28, 2019) – For the fifth straight year, the Canadian Drag Racing Hall of Fame (CDRHF) recognized the significant contributions of a select group of Canadians considered by their peers to be legends in the world of competitive drag racing.

Among the 16 Canadian nominees from across Canada and the U.S. inducted this year are four world champions, and—for the first time since the CDRHF was founded—father and son nominees. To date, 116 Canadians have been inducted into the Canadian Drag Racing Hall of Fame, 15 of them posthumously.

“As in previous years, each of the individuals nominated has had considerable input into the sport of drag racing. Their influence is felt to this day and it is thanks in part to their impressive legacy that the sport enjoys the popularity it does,” says John Scotti, founder of the Canadian Drag Racing Hall of Fame. “It is indeed an honour to pay tribute to their outstanding accomplishments as we welcome these new legends into the Hall of Fame.”

All inductees received the custom-tailored CDRHF blue blazer and an engraved custom-designed CDRHF ring. As is tradition, this year’s inductees were invited to sign the organization’s official Book of Honour, adding their signature alongside those of fellow inductees from previous years.

To be nominated, candidates must reside in or be an expatriate of Canada, have actively been engaged at the top level of their categories for more than 25 years and must have made a tangible or considerable contribution to the sport. Some categories may require that candidates have established a national record as an individual or as a member of a team (National Hot Rod Association, International Hot Rod Association, or American Hot Rod Association national record or national event win). Inductees may also come from other areas of the sport, such as photography and track operations.

About drag racing: Imagine sitting in a rocket that delivers 5 Gs, or a gravitational force of five times your body weight. Except there’s no pressurized cabin between you and all those Gs, and instead of space, you’re hurtling down a ¼ mile course at more than 332 miles an hour. Almost as old as the history of the automobile itself, drag racing began when we first discovered our thirst for speed. It is the fastest and quickest form of professional motorsport racing in the world today and its popularity continues to grow. Those who race have the courage to take control of a 10,000-horsepower machine and the expertise to compete side-by-side with another driver to cross the finish line in less than 3.680 seconds. For these, and many other reasons, we salute the extraordinary achievements of Canadians in drag racing, in the Canadian Drag Racing Hall of Fame.