“It feels good to have companies like Strutmasters.com support a team that literally hasn’t competed yet,” said Foley, who last raced in NHRA Top Fuel in 2011. “There’s a lot of teams they could go to, and for Chip to have the confidence in us, it means a lot. I think a lot of it had to do with our past competition, and I think he felt confident that in a little bit of time we will be competitive.”

Founded in 1999 by Chip Lofton, Strutmasters.com manufactures and sells suspension parts and air-to-non-air suspension conversion kits for vehicles ranging from street cars and hot rods to trucks and motorcycles. The company offers affordable solutions to fix costly repair projects, and their friendly, knowledgeable staff has helped the company earn a reputation as “The Suspension Experts.”

“This is a business that does very well for themselves,” Foley said. “A good portion of their sales are created online, so we’ll have to be creative in how we draw attention to their website and send fans to Strutmasters.com. Myself and Guy [Pierce, business development adviser] make a serious effort to put some value on the car, but also put value on what we can bring to the table Monday through Thursday.”

Foley looks forward to the opportunity to work with Lofton, who has become a prominent figure in the NHRA pro pits in recent years, as he supports multiple teams in a variety of classes. 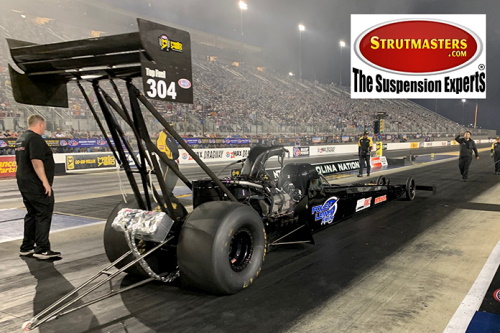 “I’ve gotten the opportunity on two occasions to spend some time with Chip,” Foley said. “You really couldn’t find a more down-to-earth guy, especially for someone who’s so successful. I think those are qualities that we have also, which excites me about growing the relationship in the future.”

“The hope is this is the beginning of several announcements over the winter,” Foley continued, “but we’re excited that somebody had the faith in us to get the ball rolling. We’ll do everything we can to represent Chip and Strutmasters.com well.”

Foley will make his 2020 debut at the NHRA Arizona Nationals at Wild Horse Pass Motorsports Park near Phoenix in February.