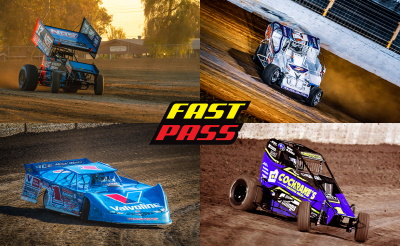 CONCORD, NC (December 13 2019) – Two years after the introduction of the Sprint and Late Model FAST PASS options, DIRTVision is excited to announce the new all-access FAST PASS, offering subscribers access to all World of Outlaws events — both Sprint Cars and Late Models — along with the DIRTcar Summer Nationals & Summit Modified Nationals tours, the new Drydene Xtreme DIRTcar Series, and a full slate of Australian action, including the Ultimate Sprintcar Championship, Ultimate Speedway Challenge along with Valvoline Raceway, Perth Motorplex and more.

“Our fan and subscriber base is the heart and soul of DIRTVision. As we grow, we are consistently looking to give each subscriber as much value and compelling content as possible,” said Director of Broadcasts Brian Dunlap. “Since its inception in 2018 the FAST PASS subscription program has increased fan engagement night in and night out. By combining FAST PASS subscriptions our goal is to give more fans access to more content, further increasing engagement and ultimately driving attendance at the track.”

Current subscribers need not take any action. The two existing subscriptions will simply be merged into one all-access DIRTVision FAST PASS for the same price of $39/month. The DIRTVision FAST PASS will now offer the best Sprint Car, Late Model, Modified and Midget racing in the World, from the United States, Canada, and Australia.

Fans can view the upcoming DIRTVision schedule and sign up for the new all-access FAST PASS at DIRTVision.com, effective immediately.

DIRTVision® is your premier dirt racing broadcast provider. From LIVE race coverage to historical races, it’s your one-stop-shop for exclusive video and audio coverage of the World of Outlaws Sprint Car Series, the World of Outlaws Late Model Series, the Super DIRTcar Series Big-Block Modifieds, Knoxville Raceway, and the many divisions of DIRTcar Racing. Follow DIRTVision on Facebook, Twitter and Instagram.