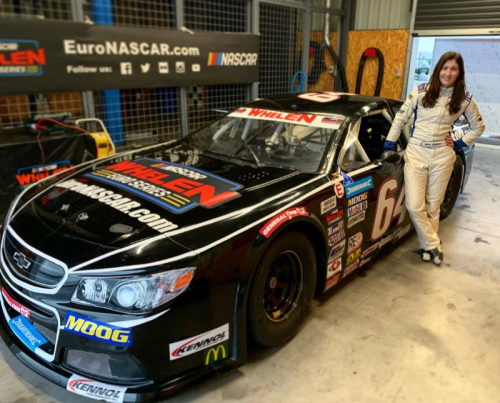 (January 6, 2020) –  Julia Landauer will enter the 2020 NASCAR Whelen Euro Series season driving full-time for PK Carsport in the the EuroNASCAR 2 championship. After testing the Euro NASCAR car during the December session of the NWES Drivers Recruitment Program, Landauer signed a contract with the Belgian top team to aim at becoming the first woman to win a NWES title.

A native of New York City, Landauer was the first and youngest female champion in the Skip Barber Racing Series at 14 years of age before becoming the first woman to win a NASCAR Track Championship at Motor Mile Speedway in the NASCAR Whelen All American Series in 2015. Moving to the NASCAR K&N Pro Series West in 2016, she grabbed seven top-5 finishes and closed the season fourth in points. She was among the drivers selected for the 2016-2017 NASCAR Next class and in the last two seasons, she competed part-time in the NASCAR Pinty’s Series, collecting one top-10 finish in nine races. 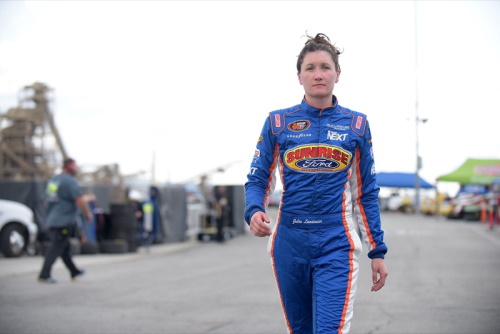 IRWINDALE, CA: Julia Landauer, driver of the Lucas Oil/Eibach/Sunrise Ford, walks in the garage during practice for the K&N West Series Napa Twins 100 at Irwindale Speedway on March 25, 2017 in Irwindale, California.

“My goal for 2020 was to find a series that I could race full time in. A few people told me about the NASCAR Whelen Euro Series and how competitive and fun the series is, so I did research and thought it would be an awesome series to race in,” said Landauer, who is the first Recruitment Program participant to announce plans for the upcoming season. “I wanted to race full time for a competitive team and PK Carsport is just that. I was introduced to Anthony Kumpen a few months ago and we had good discussions, so I’m really looking forward to working with him and the team, learning more about the cars, and fighting for wins every race.”

Landauer graduated from Stanford University in 2014, earning a Bachelor of Science degree in Science, Technology, and Society. Outside racing she also works as an advisor and a motivational speaker. 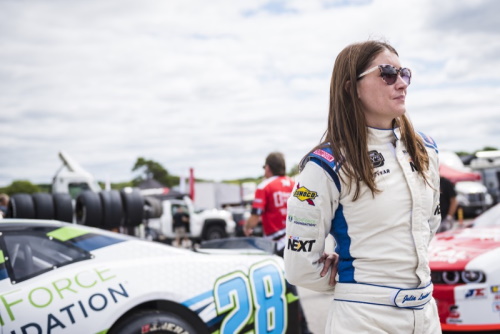 Involved in the NASCAR Whelen Euro Series since 2014, PK Carsport is one of the powerhouses of the European NASCAR series. The Belgian squad earned two EuroNASCAR PRO titles – both with Anthony Kumpen at the wheel of the #24 Chevrolet – two EuroNASCAR 2 titles with Maxime Dumarey and Stienes Longin and a total of 29 race wins across the two NWES championships.

“At PK Carsport are all enthusiastic to have Julia in our team for 2020. She’s a very talented driver, she proved she can deliver very good results and that’s exactly what we want at PK Carsport: to race at the front with both our cars in both NWES championships,” said PK Carsport team owner Anthony Kumpen. “Expectations will be high for her and we’ll do our best to help her become the first woman to win a NWES championship. We’re very excited about this and we think she’s a perfect fit for our team. We’re looking forward to a great season with Julia at the wheel of a PK Carsport car!” 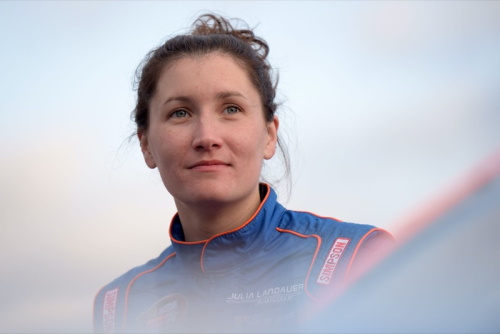 IRWINDALE, CA: Julia Landauer, driver of the #6 Lucas Oil/Eibach/Sunrise Ford Ford, stands on the grid before the K&N West Series Napa Twins 100 at Irwindale Speedway on March 25, 2017 in Irwindale, California.

“I’m really excited to race on road courses all over Europe and I liked how the car handled in the Recruitment Day. My goal is to run up front, win races, and contend for the championship. And to have a lot of fun,” concluded Landauer. “There are so many great tracks! I’m particularly excited for Valencia and the oval in The Netherlands.”

PK Carsport will announce which car Landauer is going to drive at a later date, before the April 25-26 Euro NASCAR season opener at Valencia, Spain.