The series has provided standing room-only crowds and incredible drag racing since the early 2000s, with St. Louis being witness to some of the greatest moments in its history. ADRL’s 2009 race still stands as one of the best-attended events in the track’s history with a traffic jam consisting of eager fans backed all the way to the Gateway Arch. Thanks to the Stan Musial Bridge and expanded parking within the facility, fans won’t have to worry about heavy traffic, but can still expect breathtaking eighth-mile action on one of the best racing surfaces in the drag racing world.

Word of the ADRL’s return in December at the PRI show in Indianapolis created a buzz within the industry with some of the best drivers in the sport already announcing their participation. Racers such as Frankie “Madman” Taylor, Bubba Stanton, Jon Stouffer, Randy Merick, Adam Flamholc, and NHRA standout Scott Palmer are expected to race Pro Extreme here in April with participating drivers to be named soon in the Big Tire No Time, Small Tire No Time, Jr. Dragsters, and local bracket fields.

ADRL President Mel Roth knows all about the quality of racing at World Wide Technology Raceway. His Street Car Super Nationals event is entering its seventh year in St. Louis, as are his Premier Street Car Association races.

“I can’t say enough about this track,” Roth said. “The fans are awesome, the racers are some of the best you’ll ever see, and hands down, this is one of the best-prepared tracks we’ve ever raced at. The track crew busts their butts and the results speak for themselves. It doesn’t matter what the weather conditions are, you can expect record-breaking action here any and every time cars go down the track.” 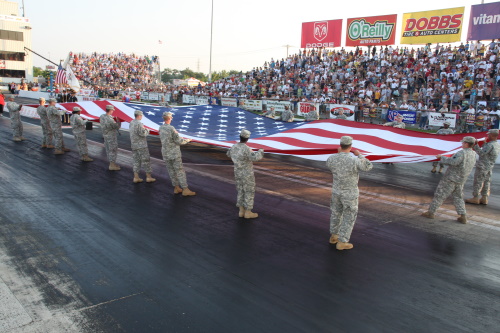 The announcement of Roth as ADRL president was welcome news to Chris Blair, the track’s executive vice president and general manager.

“Having worked with Mel for nearly 20 seasons and here in St. Louis for seven Street Car Super Nationals events, we were pleased to see that he would be serving as president of the new American Drag Racing League,” Blair said. “He is an extremely hardworking promoter who has the trust of the racers and understands the importance of delivering a quality show to the paying customer.

“I think he will do some incredible things with this property and provide our fans with yet another exciting show.”

In addition to St. Louis, the ADRL is visiting the Texas Motorplex June 5-6 with a fourth date and event sponsors to be announced soon.

For more information on the American Drag Racing League and to stay up-to-date on breaking news, follow them on their official page on Facebook at Facebook.com/ADRLDrags and on Instagram @ADRLDrags. Fans can also visit the official ADRL website at ADRLDrags.com.