Additionally, JEGS is sponsoring the live video feed of each race, bringing all the on-track action to the Internet each day via MotorManiaTV.com.

With a combined purse of more than $3M this year, the JEGS SFG 500, JEGS SFG $1.1 Million, JEGS SFG Superbowl of Bracket Racing and the FTI SFG 350 presented by JEGS are guaranteed to bring the top drag racers from across the country.

“I’m so excited I don’t think it’s even sunk in yet,” SFG CEO and founder Kyle Riley said. “Of course, our series has grown exponentially since we started it four years ago and sponsorship dollars allow us to get even bigger and better, but I’m much more excited about aligning ourselves with a worldwide company like JEGS. Nothing legitimizes us more than putting the JEGS brand on what we’re doing.

“We had a dream of putting on the best bracket race in the country with the biggest purse and we got off to a great start in 2016 at Piedmont Dragway with our first SFG Superbowl, which paid $50K a day. Fast forward to last year’s SFG 500 and we had a sold-out show that paid $525K to the winner, the largest payout in drag racing history.”

Discussions about a sponsorship deal actually began at last year’s SFG 500 event, which had attracted six-time world champion and JEGS vice president Jeg Coughlin Jr. The main event was a great day of racing for Coughlin, who survived a grueling nine rounds of eliminations against a field of more than 700 racers to finish in the final four. Gage Burch was the ultimate winner.

“We’re very excited to be furthering our sponsorship with Kyle and his crew at SFG,” Coughlin said. “We’ve been involved in some capacity since they started and we’ve always enjoyed the level of competition and the overall atmosphere at the events. We are happy to continue on with what Kyle is building.

“It’s so great to see bracket racing growing at this rate. There are so many dedicated promotors out there putting on such great events and the advancements we’ve seen in bracket racing, especially in the last 10 years or so, have reached a point where the payouts are bigger than anything in the sport. It’s fantastic.”

“We’re going to kick-off each race with a special JEGS SFG $20,000 Warm-Up that only cost $100 to enter,” Riley said. “That’s definitely the best deal in drag racing. Plus, it’s a great way for racers to check out the track under race conditions.”

Due to sold-out fields at all of their events in 2019, Riley encourages interested participants to visit RaceSFG.com to pre-register for this year’s races to ensure themselves of a spot in the field. Racers that pre-register will receive a special SFG discount they can use at JEGS.com. 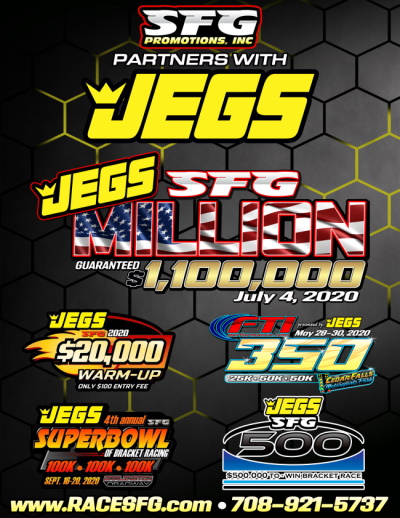