“The NHRA Summit Racing Jr. Drag Racing League features the future stars of our sport,” said NHRA Vice President of Racing Administration Josh Peterson. “This season is shaping up to be incredibly competitive and exciting. Best of luck to all of the drivers.”

Osage Tulsa Raceway Park is a member of NHRA’s Division 4, South Central Division, and is outside of downtown Tulsa, Okla. The facility acquired the Western Conference Finals in 2016 and continues to grow the event each season.

“Osage Tulsa Raceway Park is thrilled to be hosting the Western Conference Finals for the fourth time,” said Todd Martin, co-owner of Osage Tulsa Raceway Park. “The staff looks forward to all the Jr. racers coming; it’s a week of racing, games, food, and friends, and we have a lot of Jr. activities planned leading up to the Western Conference Finals. The event just keeps growing and getting better each year. I would like to extend a personal invitation to all the NHRA Jr. racers and families.” 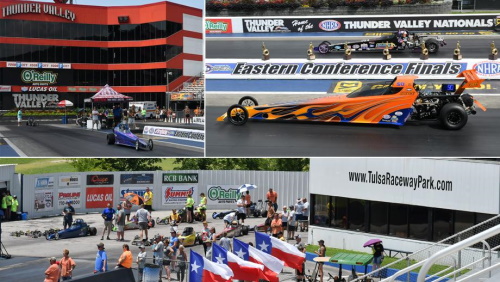 The region will welcome hundreds of young racers and their families for a week full of racing activities, beginning July 10 with the Huddleston Performance Jr. Dragster Nationals presented by Mike Bos Chassis Craft and culminating July 16-18 with the NHRA Jr. Drag Racing Eastern Conference Finals.

“The 2020 edition of the NHRA Junior Drag Racing League’s Eastern Conference Finals will truly showcase the bright future of this sport,” said Julie Bennett, vice president of Bristol Dragway. “We’re pleased to once again welcome the next generation of drivers to Thunder Valley, where they will learn the importance of hard work, teamwork, and fellowship while pursuing their racing dreams.”

Created in 1992, the NHRA Summit Jr. Drag Racing League allows kids between the ages of five and 17 to experience the thrill of motorsports competition in a controlled environment at tracks in each of NHRA’s seven geographic divisions. The NHRA Summit Racing Jr. Drag Racing League creates family involvement in drag racing at an affordable level. Many of the league’s former participants have gone on to compete in other NHRA classes. Top Fuel racer Shawn Langdon (the 2013 NHRA Mello Yello Series Top Fuel world champion and a two-time Super Comp national champion in the NHRA Lucas Oil Drag Racing Series) and three-time NHRA Pro Stock world champion Erica Enders are among the league’s most accomplished graduates.