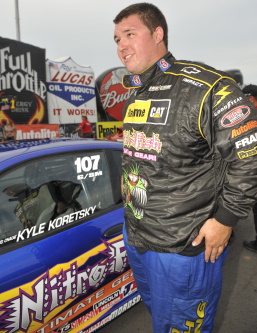 RICHBORO, Pa. (January 23, 2020) – More than a decade after Kenny Koretsky made his final competitive runs down a dragstrip, his son, Kyle Koretsky, is now preparing to make his debut in the NHRA Pro Stock class. Kyle, 30, will be racing a Chevy Camaro prepared by the Mooresville, N.C. based Ken Black Racing team. He plans to debut at the 51st annual NHRA Gatornationals, March 12-15 in Gainesville, Fla.

“I grew up watching my dad race and from the time I was a little kid, all I wanted to do was follow his lead and race in Pro Stock. I can’t believe it’s finally going to happen,” Kyle said. “I definitely have a little bit of nerves, but I’ve been around these cars my whole life, so I have a good idea what to expect. Pro Stock cars are not easy to drive, but I’m determined to learn. I’m going to be surrounded by a team that is full of champions like Greg Anderson, Jason Line and Bo Butner, so that’s a big plus. I can’t think of a better group to be a part of.”

Kyle is already an accomplished driver who has enjoyed success as a sportsman racer. In 2009, he drove to a runner-up finish in the ultra-competitive Comp Eliminator class at zMax Dragway in Charlotte. Koretsky plans to upgrade his license in the next few weeks and is also aiming to compete in the World Doorslammer Nationals in Orlando the week before the Gatornationals. All of this will take place under the watchful eye of his new KB Racing teammates, including world champion drivers Anderson and Line, and their highly regarded crew chiefs, Rob Downing, Tim Freeman, and Dave Connolly.

Proud father Kenny remains the only driver in NHRA history to qualify in the Top Fuel and Pro Stock categories at the same event, a feat he accomplished in Phoenix in 1990. During his long career, the elder Koretsky was one of Pro Stock’s most colorful racers, earning the nickname “Captain Chaos.” He was also very competitive with a pair of runner-up finishes in Pro Stock including the 2004 U.S. Nationals, where he lost to KB Racing’s Anderson in the final round. The Pennsylvania native has also enjoyed success as a team owner and sponsor who has been associated with well-known NHRA pros including Clay Millican, Tony Pedregon, Bob Tasca III, LE Tonglet, Matt Hartford, Frank Iaconio, Rickie Smith, and the late Scott Geoffrion.

“Kyle has wanted to try racing in Pro Stock for as long as I can remember and I think he’s finally earned this opportunity,” said Kenny. “During the week, he’s the Vice President of Maintenance and Field Operations for our company, KPK Development. He works hard, but I also know how much he loves racing. In our family, we like to work hard and play hard, and Kyle understands that. For a long time, NHRA fans embraced ‘Captain Chaos’ and now they’re going to have a chance to meet ‘Kid Chaos.’ Seriously, I think he’s going to do very well. Given the program that Ken Black has put together, and the success that team has had, he’s going to have opportunities to win races that I never had.”

In addition to KPK Development, Koretsky’s Pro Stock Camaro will be backed by Nitro Fish apparel, another business owned by the Koretsky family. At this point, he plans to compete in 10-12 events during the 2020 NHRA Mello Yello Drag Racing season.

“My biggest goal is to get the first Pro Stock win for our family,” Kyle said. “My dad has won a lot of races and championships as a sponsor and a team owner, but not as a driver. He was always a good driver, but never seemed to have the power to run with the guys at the front of the pack. With the KB team, that’s not going to be an issue. We’re going to have plenty of power. It’s up to me to do the rest. I can’t imagine how excited my dad would be if I can bring home our first NHRA Wally (trophy).”