(January 25, 2020) –  After five years Gianmarco Ercoli will return to the team he made his NASCAR Whelen Euro Series debut with. Poised to become the first driver to win both EuroNASCAR championships, the Italian will drive one of CAAL Racing’s cars in EuroNASCAR PRO in the 2020 season.

It was with CAAL Racing that Ercoli entered his first EuroNASCAR 2 race at Brands Hatch in 2014, when he was 19 years old. That first season saw him go exceptionally close to Victory Lane several times and ended with two podium finishes. Ercoli and CAAL Racing then parted ways and the Rome native grabbed the 2015 EuroNASCAR 2 title and his maiden EuroNASCAR PRO win all for the Racers Motorsport organization. The first EN2 Champion to reach Victory Lane in the PRO championship, Ercoli is now back where he began, with the clear goal to put his name in the NASCAR Hall Of Fame as the fifth NASCAR Whelen Euro Series Champion. 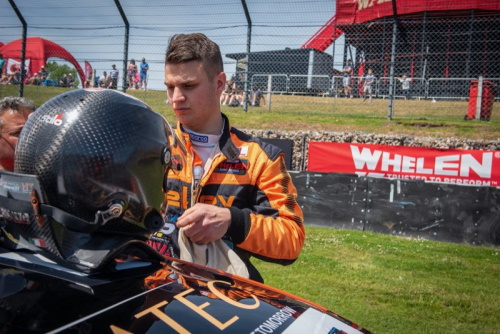 “With CAAL we always had a good relationship and we kept in touch in the last few years and I am really happy to join them in 2020. We already did very well together and we want to pick up where we left. I’m sure they are perfectly prepared and we’ll have to work to hit the ground running in Valencia,” said Ercoli, who already took part in an early test session with CAAL. “I want to thank everybody at Racers Motorsport because we had five great years together. Now I’m ready to open a new chapter and I’m looking forward to hit the track again soon!”

CAAL Racing is one of the powerhouses of the European NASCAR championship. The Italian team took the NWES crown two times in a row with Alon Day and scored an outstanding 28 wins and 19 pole positions overall – the most all-time – in EuroNASCAR’s top category with four different drivers.

“We are very happy to have Gianmarco back with us after 5 years. He’s a driver who showed since the very beginning he has the potential to be among the best and the last few years he improved a lot and CAAL Racing did as well,” said Luca Canneori, CAAL Racing’s team manager. “We did a positive test and we are looking forward to the upcoming season, we are confident we can fight for the title and we believe Gianmarco can take the final step and climb on top of the final podium in Hockenheim.”

In the 2019 season, Ercoli ended up seventh in points after scoring one podium in Hockenheim and eight top-10 results in 13 races. His best results came in the four playoff races, in which he never finished outside the top-5.

“The ambition is the same as the other 30 drivers on the grid: winning. We want to be competitive for the win right from the start and score as many points as possible because with such a strong competition in the NASCAR Whelen Euro Series, the margin for error is getting smaller and smaller every year,” concluded Ercoli. “I am particularly looking forward to the Vallelunga playoff race because it’s my home track and it’s a challenging one. I’ll be even more motivated and I’ll wait for everybody at the Colosseum!”

The NASCAR Whelen Euro Series championship will kick off on April 25-26 at the Circuit Ricardo Tormo in Valencia, with four exciting NASCAR races around the 4Km Spanish road course.