YORBA LINDA, Calif. (Febuary 03, 2020) – A successful test session at The Strip at Las Vegas Motor Speedway wasn’t the only thing NHRA 16-time Funny Car world champion John Force had to celebrate over the weekend. The legendary driver became the first drag racer to be inducted into the National Motorsports Press Association Hall of Fame on Saturday evening.

At the National Motorsports Press Association’s annual banquet hosted at Hendrick Motorsports in Concord, N.C., Rusty Wallace, a long-time friend of Force, introduced the legend who has an unprecedented 151 race wins and is competing for his 17th championship in his 44th NHRA season, all at the age of 70. The introduction was followed by a sizzle reel of the winningest driver in NHRA history and a video of Force expressing his thanks to the organization.

“I’m honored and truly humbled, the first drag racer to be inducted. I wish I could have been there but we spent three days in Vegas testing and getting ready for the 2020 NHRA season. Can you imagine? Seventy and going 330 still but I’m doing it with my kids so I’m having a great time still,” Force said. “Huge thank you to Rusty Wallace for hosting my introduction, we have a lot of history together. To the other inductees, Tony Stewart, Janet Guthrie and Kirk Shelmerdine, congratulations. I’m just happy to be included in this group, an old truck driver who is still getting to do what he loves to do.”

Force will be back on the track this weekend, Feb. 7-9, “doing what he loves to do” in the NHRA Mello Yello Drag Racing Series for the 2020 season opener, the NHRA Winternationals at Auto Club Raceway at Pomona in Pomona, Calif. 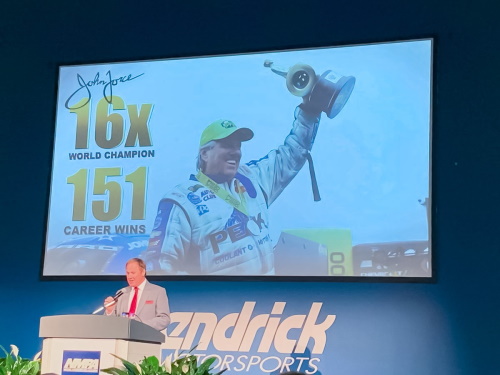