POMONA, Calif. (February 4, 2020) – After putting together the most consistent and impressive season of his standout NHRA Mello Yello Drag Racing Series career in 2019, Robert Hight knows just how he can top his championship season in 2020. It’s been nearly 20 years since someone has won back-to-back championships in the class, and it’s something Hight would love to accomplish this year.

That end goal is a ways off, but Hight can get off to a great start in 2020 at his hometown track during this weekend’s 60th annual Lucas Oil NHRA Winternationals presented by ProtectTheHarvest.com at Auto Club Raceway at Pomona. It’s a special facility for Hight, who started his 2019 title season with a win at Pomona in his 11,000-horsepower Auto Club of Southern California Chevrolet Camaro SS. Adding a sixth Pomona win would put him on

“Three months is too long to be away from the track and the fans, so I’m excited to get back at it and try to defend this championship,” Hight said. “Nobody has done that since John (Force, in 2002), so it shows you just how hard it is. It’s a tall goal, but it’s one we have. Our goal last year was to win a championship where we were the dominant car all year long and we kind of did that. We can check that off our list, so to win two in a row would be really special.”

Doug Kalitta (Top Fuel), Hight (Funny Car) and Bo Butner (Pro Stock) were last year’s winners of a race that will be televised on Fox Sports 1 (FS1), including finals coverage beginning at 5 p.m. EST on Sunday, Feb. 9. It is the first of 24 events during the 2020 NHRA season and Hight will have his work cut out trying to top a spectacular 2019 campaign.

He was the points leader at 23 of the 24 events on the strength of six wins, nine final round appearances and eight No. 1 qualifiers. Hight grabbed his 50th – and then 51st – win throughout the course of the year, while the championship put him in exclusive company, joining the likes of Force, Don Prudhomme and Raymond Beadle as the only three-time champs in Funny Car. It certainly makes Hight proud, but he’s just as excited that his team has just continued to work.

“What I really take away from this off-season is we didn’t get lazy over the winter or celebrate too much just because we won the championship,” Hight said. “We worked on new things and worked hard, and they paid off in performance (during testing). They’ve stayed focused and our team had that mentality where they want to keep trying to get better. That gives you confidence going into the season, but confidence can only take you so far. You have to perform and your car has to perform.”

That doesn’t appear to be a problem heading into Pomona, as Hight and his team, led by standout crew chief Jimmy Prock, looked strong in testing at Las Vegas. Hight stayed in the 3.80s on every run, furthering his belief he can compete for a fourth Funny Car world title, which would also tie him with Prudhomme and Bernstein. But to do that, Hight knows he’ll be challenged by an elite group of standouts in the class, including Force, a 16-time world champ, Matt Hagan, Jack Beckman, 2018 world champ J.R. Todd, Ron Capps, Alexis DeJoria, Tommy Johnson Jr., Bob Tasca lll, Tim Wilkerson and Cruz Pedregon.

“We’ve had a great car for three years now and testing went really well, so we feel good,” Hight said. “Pomona is my home track and it’s got a lot of history. There’s nothing like racing in southern California and I still get the butterflies because it is so special. But nobody on our team is second-guessing things. We’re all really excited to be back to perform for all the fans, and there’s nothing like opening the season with a win.” 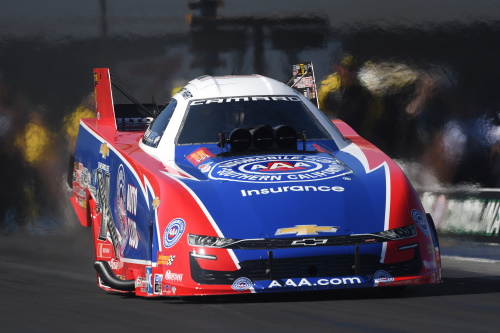 In Top Fuel, veteran standout Doug Kalitta will aim for his third straight Winternationals win and fifth straight final round appearance. Trying to prevent that are a host of top names, including Antron Brown, a three-time world champ, Leah Pruett, Terry McMillen, Shawn Langdon, who is returning to the class, Clay Millican, 2017 world champ Brittany Force and Austin Prock.

To celebrate the 60th annual Winternationals event, NHRA Heritage Series Top Fuel and Funny Car machines will be on site and making exhibition runs throughout the weekend. Additionally, the Little Red Fire Truck Wheelstander will be performing with special passes during the event. Fans at the Winternationals will get to launch the yearlong celebration of the 50th anniversary of Pro Stock, highlighting Pro Stock milestones and seeing special nostalgia Pro Stock cars hit tThe event also will feature thrilling competition in the NHRA Lucas Oil Drag Racing Series, where future stars of the sport hone their skills.

NHRA fans can take part in the Mello Yello Walking Tour to see the cars and teams hard at work in the pits. Fans can also attend Pro Stock School and Nitro School to learn how the cars operate and reach their thrilling speeds. Auto Club Raceway at Pomona will also host a Mello Yello autograph session and allow fans to meet their favorite drivers as well as the Sealmaster Track Walk hosted by NHRA announcer Joe Castello. Another can’t-miss experience is the winner’s circle celebration on Sunday after racing concludes. NHRA fans are invited to congratulate the winners of the event as they celebrate their victories.

Along with the exciting on-track action, the Lucas Oil NHRA Winternationals presented by ProtectTheHarvest.com will honor first responders with NHRA’s “Salute to First Responders” celebration.

Mello Yello Drag Racing Series qualifying will feature two rounds at 12:15 p.m. and 2:45 p.m. on Friday, Feb. 7, and the final two rounds of qualifying on Saturday, Feb. 8 at 1:00 p.m. and 3:30 p.m. Final eliminations are scheduled for 11:00 a.m. on Sunday, Feb. 9.
To purchase general admission or reserved seats, call 800-884-NHRA (6472). Tickets also are available online at www.NHRA.com/tickets. Kids 12 and under are free in general admission areas with a paid adult. To honor the Salute to First Responders, military and first responders can save 20 percent on general admission tickets at the gate. For more information about the NHRA visit www.NHRA.com. 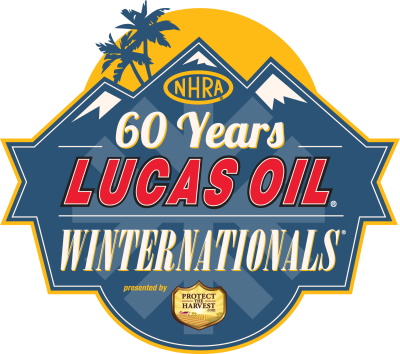 WHEN: Thursday through Sunday, Feb. 6-9