The crewman turned Funny Car champ wrapped up the 2019 season with a career-best six race victories, including a milestone 50th win at the Sonoma Nationals, three runner-up finishes and eight No. 1 qualifiers that led to taking home the white hat for a third time in his 15-year career. Now, as he makes his way to Auto Club Raceway at Pomona to kick-off his 16th season, he’ll be competing to maintain his dominance over the Funny Car class. After an impressive performance at testing last week at The Strip at Las Vegas Motor Speedway, there’s little doubt he’s got the team to beat.

Throughout the three-day test session, Hight and the Auto Club crew tuned by Jimmy Prock and Chris Cunningham, laid down a handful of impressive passes including a 3.844-second pass at 330.12 mph on Thursday and a 3.839-second pass at 334.40 mph on Friday to be quickest of the Funny Car pack on both days.

“We had a good race car at testing. It felt really good to be back in the driver’s seat and has me excited about the 2020 season. Jimmy Prock, Chris Cunningham, the Auto Club guys and myself, we’re all ready to get back at it and chase down another championship,” said Hight who was the points leader and regular season champion last year. “We put in the work and we’re going to do the same this time around, so I’m looking forward to what this team is capable of.”

At the 2019 Winternationals, Hight powered his 11,000-horsepower Chevy Camaro SS to the No. 1 qualifier spot and went onto win the event for the fourth time in his career.

“I always love getting back to Pomona. It’s a home race for most of us at John Force Racing and it just feels good to start the season there. Last year this Auto Club team won the race and it was an awesome way to begin 2019, so I’m hoping we can start this season off the same way,” said Hight. “We all have the same mentality we did last year and are hoping for the best. It’ll be good to get back out there with Auto Club too and all our sponsors.” 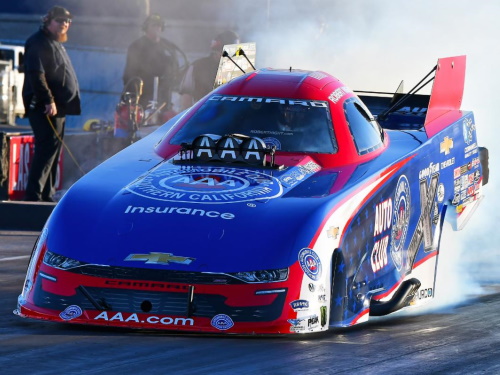