POMONA, Calif. (February 7, 2020) – It’s a new season, a new decade, and the AMALIEⓇ Motor Oil team is coming into the 2020 season with a new attitude. What seemed like one of the shortest off seasons for the AMALIE team, proved to be one of the most productive. With 5 of the 7 crew members from the 2019 season returning, along with veteran crew chief, Rob Wendland, the team was able to focus on preparing, rather than training for the 2020 season. “They say if you fail to prepare, then you prepare to fail,” said McMillen, “and showing up prepared, has brought the team a feeling of confidence going into the season opener”.

Like every team, the Amalie team experienced a few hiccups during the off season. The largest one happening at the beginning of January, when Rob Wendland, had to have emergency shoulder surgery. Plans to debut a new AMALIE Motor Oil XTERMIGATORⓇ, were put on hold, but the team worked hard in his absence to make sure that preparations in the other departments didn’t fall behind.

“ I was extremely proud of how my team came together during Rob’s time away for surgery. It just goes to show what a great team Rob Wendland has built. I also want to give a special thanks to Tony Durhammer, who is helping Rob build our new car. Welding with a sling isn’t the easiest thing to do and we appreciate his help.”

The AMALIE team skipped the pre season test session in Las Vegas, and plans to utilize the first few qualifying sessions to get a baseline on the tune up. With the confidence the team is exuding, and the excitement in the pit McMillen has a feeling that the team will definitely be able to #GatorDone in 2020. 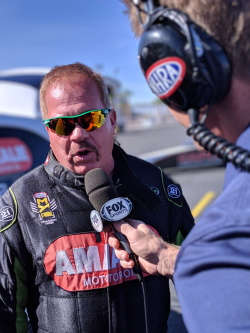