POMONA, Calif. (February 7, 2020) – Just hours away from his NHRA Pro Stock debut, Marty Robertson is feeling the full gamut of emotions one might expect heading into their first professional NHRA race.

Racing at historic Auto Club Raceway at Pomona for this weekend’s 60th annual NHRA Winternationals adds to the moment, but Robertson has enjoyed the entire process – nerves and all.

“I would say there’s a mix of excitement and anxiety,” Robertson said. “It’s a big venue, there’s a lot of hype and it’s my first time in a professional car at a NHRA race. It’s definitely exciting, but you feel a little bit of the butterflies as well.”

He got licensed last month in Bradenton as part of Elite Motorsports’ extensive testing in preparation for the 2020 season. It was a lot to take in during a short time, but Robertson, who previously excelled in the Radial vs. the World class, made a strong impression on the team.

He also lauded the work of everyone, including reigning world champion Erica Enders, who mentored Robertson on nearly every aspect of the car. It made a significant difference and it’s helped ease Robertson’s mind heading into Pomona. 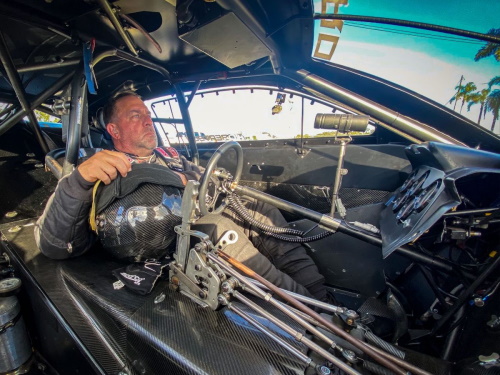 “Just having the team support me, it just makes my job easier,” Robertson said. “I know I have a badass car and a team that supports me, so I just have to do my job. It’s an entirely different experience where I’m just focused on driving. I definitely feed off of them and they’ve been so encouraging.”

When the nerves do arrive, Robertson has developed a way to keep them at bay. It’s something he’ll keep with him into qualifying and, if things go his way, into eliminations as well.

“The way I’ve handled it is I just start to focus my mind on the sound of the car, the staging, the shifting, all that type of stuff,” Robertson said. “I try to just concentrate on that and it does help me relax. I feel good. If testing is any indication of things, I think I’m in great hands.”

Getting to race in NHRA Pro Stock has always been a dream for Robertson and he’s already called the process of driving the car and getting licensed the most fun he’s ever had in the sport, also praising the professionalism of his new team.

Heading into the 60th Winternationals during the kick-off of Pro Stock’s 50th anniversary season, Robertson wants to perform on a high level as well. It’s a stacked field, as the 20 cars entered are the most for any NHRA professional category this weekend, but Robertson is still aiming high.

Getting qualified at his debut race would be a great step in the right direction, and Robertson is locked in on making strong passes every time he goes to the starting line.

“My goal is to go out there and qualify, and focus on each and every run,” Robertson said. “I’m not focused on Sunday yet, but I definitely have the car and team to do some good things this weekend.”

NHRA qualifying will feature two rounds at 12:15 p.m. and 2:45 p.m. PST on Friday and the final two rounds of qualifying on Saturday at 1 p.m. and 3:30 p.m. Final eliminations are scheduled for 11 a.m. on Sunday. Television coverage on Fox Sports 1 (FS1) begins with live action at 6 p.m. EST on Friday, continuing with qualifying coverage at 7 p.m. on Saturday and eliminations at 5 p.m. on Sunday.