CHANDLER, Ariz. (February 8, 2020) – It might be a new NHRA Mello Yello Drag Racing Series season, but Matt Hagan still feels the momentum of last year’s hot finish. The two-time Funny Car world champion won two races late in the year to jump into the title conversation and following a strong pre-season test session this season, he’s ready to pick up in 2020 where he left off a year ago.

That includes a good showing at the upcoming 36th annual NHRA Arizona Nationals, which takes place Feb. 21-23 at Wild Horse Pass Motorsports Park. Hagan is the defending champ of the race and has three wins at the track since 2015 in his 11,000-horsepower Mopar Dodge Charger SRT Hellcat, adding to the positive vibes the standout feels heading into the race and the entire 2020 Funny Car campaign.

“We’ve really got a great car right now,” Hagan said. “We finished strong and really turned it on late in the season, and we really had a great year. Then we had a good test session, and I’ve just got a lot of confidence in the team and all the parts and pieces we have. I really do feel like there’s a lot of momentum, and we’re probably carrying as much as you probably could heading into the season. I feel like if my lights stay on point, we can do some things. This car is really good and I’m excited about what the season holds.”

Billy Torrence (Top Fuel), Hagan (Funny Car) and Jeg Coughlin Jr. (Pro Stock) were last year’s winners of a race that will be televised nationally on Fox Sports 1 (FS1), including finals coverage on Sunday, Feb. 23. The duel in the desert marks the second of 24 races during the 2020 NHRA season and Hagan enters the year with plenty of optimism after another strong campaign.

He ended the decade in style, winning four races and advancing to six final rounds a year ago, finishing third in the tight points race to Don Schumacher Racing teammate Jack Beckman and reigning world champion Robert Hight. Coming so close has Hagan motivated and hungry for a world title, but nothing comes easy in the loaded class. Hight was masterful all season a year ago, while Hagan will also have to contend with the likes of Beckman, DSR teammates Ron Capps and Tommy Johnson Jr., John Force, a 16-time world champ, Cruz Pedregon, 2018 world champ J.R. Todd, Bob Tasca III, and previous Phoenix winners Alexis DeJoria and Tim Wilkerson.

“The competition doesn’t get any easier in this class,” said Hagan, who has 33 career wins and 60 final rounds. “Everything gets more dialed in and effective, and every year everybody gets more efficient. But if you can win early in the season, you can start achieving some of those smaller goals and it gets some pressure off your back. You always want to win and get that first win off your back, and it just gives you some momentum and something to build on the rest of the year.”

The good news is Hagan’s team remains nearly intact heading into 2020. It’s a group that’s been a staple of consistency for a number of years, led by standout crew chief Dickie Venables. He and Hagan have set an impressive tone for the rest of the team, which has stayed nearly the same for more than six years. That has paid dividends in the ultra-tough class, adding some piece of mind for Hagan in the process as he enters his 12th year with DSR.

“We’ve been able to keep our core together for a long time and a strong team sets you up for that success,” Hagan said. “We’ve always had a chance to win championships and it’s because of having that core group together. That does build confidence in me. I’ve seen a lot of people come and go in the class and it’s a fight just to be here. There’s definitely nothing given and I definitely don’t take it for granted. It’s always challenging and I’m very blessed and grateful to be in the seat. I’m really looking forward to seeing what we can do this year.” 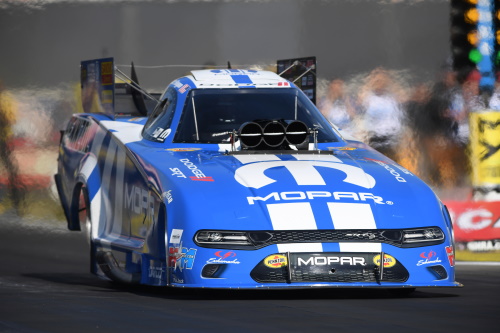 In Top Fuel, there will be a number of class standouts hoping to break through early in the season. There has been five different winners at the track in the past six years, a group that includes three-time world champ Antron Brown and Leah Pruett, who won in back-to-back years. Others to watch include Clay Millican, veteran Doug Kalitta, Terry McMillen, Shawn Langdon and Brittany Force.

Celebrating its 50th anniversary in 2020, the Pro Stock class will head to Phoenix with plenty of fanfare. The class continues to provide plenty of thrills, much like Jeg Coughlin Jr. did last year en route to his third career victory at the track. He’ll match up with the likes of defending champ Erica Enders, Greg Anderson, Jason Line, Alex Laughlin, Bo Butner, Deric Kramer and Chris McGaha.

NHRA fans can take part in the Mello Yello Walking Tour to see the cars and teams hard at work in the pits. Fans can also attend Pro Stock School and Nitro School to learn how the cars operate and reach their thrilling speeds. Wild Horse Pass Motorsports Park will also host a Mello Yello autograph session and allow fans to meet their favorite drivers as well as the Sealmaster Track Walk hosted by NHRA announcer Joe Castello. Another can’t-miss experience is the winner’s circle celebration on Sunday after racing concludes. NHRA fans are invited to congratulate the winners of the event as they celebrate their victories.