POMONA, Calif. (February 9, 2020) – The Summit Racing NHRA Pro Stock team drove into the 2020 season of NHRA’s Mello Yello Drag Racing Series with fierce intent, and after Saturday qualifying wrapped up at the 60th annual Lucas Oil NHRA Winternationals, the championship team had secured their starting positions in the top half of the field.

Jason Line, driving the silver Summit Racing Chevrolet Camaro in a season that he has declared his final as a Pro Stock driver, qualified in the No. 7 position. On the other side of the ladder, Team Summit counterpart Greg Anderson piloted the red Summit Racing Chevy to the No. 8 spot, while Bo Butner and his Strutmasters-branded Camaro will launch into raceday as the No. 4 qualifier.

In each of the most recent to season-opening events, Line and Butner have been head-to-head in the final round. Butner waltzed off with the trophy both times, but this year, the path to the final is likely to include Anderson, who is a 12-time winner in Pomona. Anderson’s best qualifying time was a 6.562-second pass at 210.80 mph. 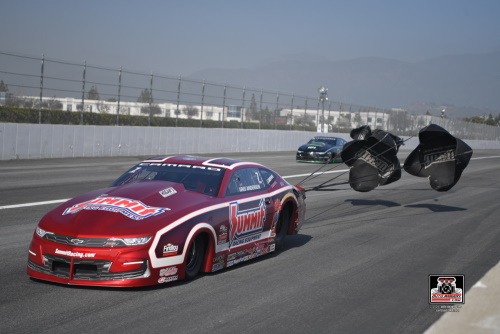 “Tomorrow could very well be a great day,” said Anderson, who will begin eliminations with a first-round meeting with Chris McGaha. “Our KB Racing power is right there, and we can see that because of how well our team cars have done in qualifying [KB Racing-powered Deric Kramer is No. 2 qualifier and scored three bonus points]. We’ve struggled with the engine tune-up with my car, though. The red Summit Racing Chevy is capable of winning the race, so really as long as we can get the engine tune-up tomorrow, we’ll be in great shape.”

Line’s Summit Racing steed was quick enough to earn a bonus point as one of the top performing cars of a session, and his best time of 6.558, 208.59 has him lined up with Alex Laughlin in the first round. A five-time Winternationals winner and a finalist at the event in each of the last six seasons, Line is looking for a trophy to kick off his “Finish Line Tour” on the right foot.

“I didn’t hit anything in qualifying, and I’m super stoked about that,” joked ever-sardonic Line. “But yeah, we’re definitely getting better with each run, and we’re off on a few things, but overall not bad. We didn’t get as much testing as we needed to over the winter, but that’s okay – we’ll see what tomorrow brings, and we’re happy to be here. This is a race we always enjoy.”

Butner, who will line up against first-round opponent Steve Graham on Sunday morning, picked up a pair of bonus points in qualifying and logged a best time of 6.553, 210.18. With two consecutive season-opener wins behind him, the amiable driver would like the opportunity to race Line one more time in the Winternationals final.

“I think it would be a lot of fun to meet Jason tomorrow in the final round at the first race of his farewell tour,” said Butner. “He always drives his ass off when he races Bo Butner, and I tell him, why don’t you just act like you’re running me all the time? That’s why I used to hang a picture of me in his car a few years ago. But that’s what makes it fun. We like a good race. This is his last year, but he’ll always be a true friend. He’s like a big brother.”

Eliminations for the Lucas Oil NHRA Winternationals have been moved to 10am PT at Auto Club Raceway at Pomona. 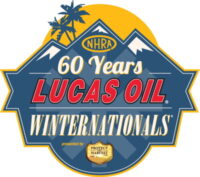