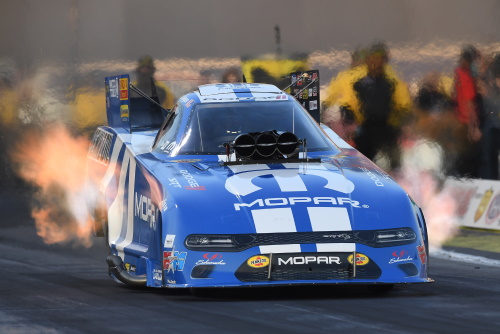 POMONA, Calif. (February 9, 2020) – It was a strong and fast start for Don Schumacher Racing (DSR) veteran pilots Matt Hagan and Jack Beckman as they drove their Mopar Dodge//SRT Hellcat Funny Cars to the No.1 and No.2 qualifier positions, respectively, in anticipation of Sunday’s first race day of the 2020 National Hot Rod Association Mello Yello Drag Racing season at the 60th annual Winternationals.

Hagan kept his Mopar Dodge//SRT Charger Hellcat Funny Car atop the timesheets at the historic Auto Club Raceway in Pomona, Calif., through four qualifying sessions to earn his first No.1 qualifier position of the new year after running low E.T. on his first and last runs. 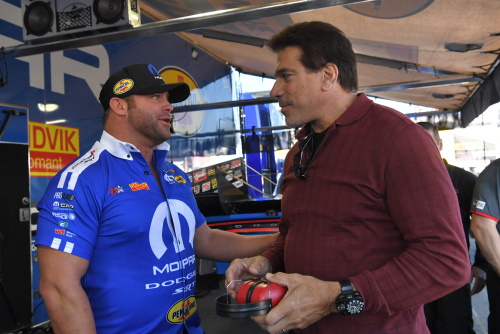 “This Mopar Funny Car is just flying out there,” said Hagan who improved on Friday’s provisional top spot pass of 3.867 second /331.20 mph with a 3.841 second elapsed time qualifying run a top speed of 333.25 mph. on his final run. “When your team puts a hot rod underneath you like that, it’s always fun.”

“Going into race day tomorrow, my lights are good, the car is running great, the guys are doing a phenomenal job, and we came off of a really strong season last year, so we’re just focused on keeping the ball rolling,” added Hagan who collected eight qualifying points for his efforts and will face off against Alex Miladinovich in the first round of eliminations.

Following up his win at Pomona to cap off the 2019 season, Beckman showed that he is looking to keep that momentum going into a new season. After driving the Infinite Hero Foundation Dodge Charger SRT Hellcat to a provisional second spot on Friday with a 3.868 second / 326.95 mph, he earned the second place starting position on Sunday.

“Other than this head cold, it’s been a perfect weekend so far,” said Beckman who collected a category best total of nine qualifying points, with his qualifying performance. “We’ve gotten bonus points every single session. I’ll drive with a plugged up head all year long if it means I get a hotrod like this.” 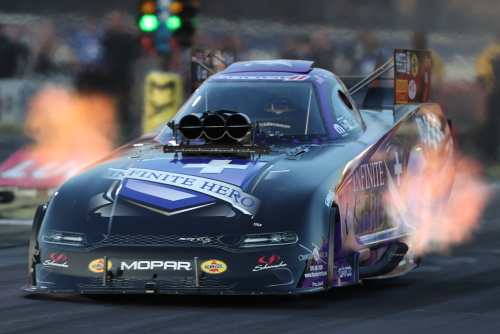 “We might have to throw out all the data that we’ve accumulated so far,” added Beckman who will face Steven Densham in first elimination round action. “It’s going to be interesting. That’s why you want to qualify high. You get a better first round draw so that if you get a hiccup, you still have to get that first win light and data.”

“I’ve got a really good solid car that’s been really consistent,” said Johnson Jr. “We just missed it a little bit in Q3. but the other three were really good solid runs, nice and consistent to be able to tune it and adjust it. I think that will be important tomorrow because the weather change will be so drastic that you need a tunable and adjustable racecar.”

DSR teammate Ron Capps made big strides this weekend, even winning the “NHRA Never Rest” award after using all four sessions to mount a comeback from the trailer fire that cost the team a car and valuable testing time in Las Vegas.

“Obviously, it was a check-out run the first lap, and then to go out and get qualified that second lap, I was so emotional,” Capps who improved steadily through qualifying to earn a seventh place seed for eliminations with a 3.911 sec. E.T at 328.38 mph. “I just wanted to make sure these guys, as hard as they’ve worked, to get the car down the track and get qualified, that’s always the goal.”

“The Cinderella story would be for us to win the race, but right now, it’s one step at a time,” added Capps who will line-up his HEMI®-powered Charger Hellcat against Bob Tasca III in the first round.” 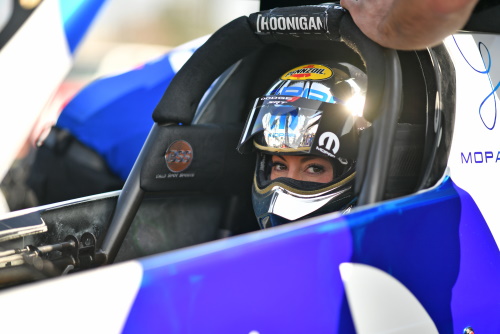 In Top Fuel action, Leah Pruett moved her DSR Mopar Dodge//SRT Dragster up a step from a provisional fourth place on Friday to secure the third spot on the eliminations ladder with a best qualifying run of 3.687 sec. at 328.06 mph. She’ll face opponent Jim Maroney for a first round match up.

Elimination rounds at the 60th annual NHRA Winternationals will be televised beginning at 5 p.m. (ET) on Sunday, Feb. 9, on FOX Sports 1 (FS1).

Gilley, who hails from Hilmar, California, drove his E/SA 1969 Dodge Dart GTS to a round-four finish in Stock Eliminator at the 60th annual NHRA Winternationals. Powered by a Mopar 340 small-block, Gilley ran a string of consistent high 10-second elapsed-times during competition.

During round four, both he and his opponent had the same reaction times, but unfortunately Gilley lost by a mere 0.0193 seconds. For his great driving and tuning efforts, Gilley will receive $500 dollars from Dodge for advancing the furthest in his class.

In Super Stock, Loge, a lifelong Mopar racer and resident of Antioch, California, raced his SS/MA 1972 Plymouth ‘Cuda 340 to a round-four finish and looked strong throughout the race weekend, losing by only 0.0318 seconds to his competitor. He will also receive a $500 dollar bonus from Dodge for going the furthest in his class during the NHRA Winternationals

The Dodge Top Finisher award, now in its fourth year, awards $500 to Stock Eliminator and Super Stock drivers who advance the furthest behind the wheel of a Mopar-powered Dodge, Chrysler or Plymouth race car at all 24 NHRA national events.