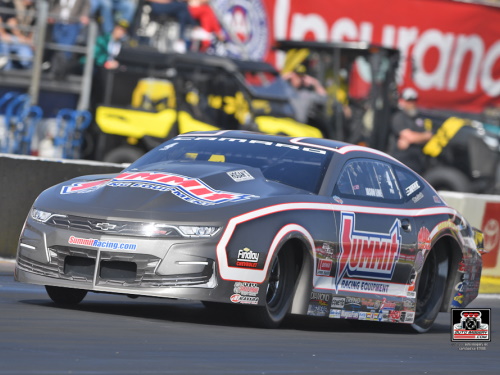 POMONA, Calif. (February 9, 2020) – Jason Line’s self-proclaimed Finish Line Tour is off to a strong start. Line, the driver of the silver Summit Racing Chevrolet Camaro and a three-time Pro Stock world champion, raced to the final round at the 60th annual Lucas Oil NHRA Winternationals for the seventh consecutive season, and although he didn’t leave with the trophy this time, he exits Auto Club Raceway as the No. 2 man in the Pro Stock points and with a good measure of momentum.

“We had a good day,” said Line, who met Jeg Coughlin in the final round. “It wasn’t bad, it just wasn’t exactly what we wanted. We’ll take it, though, and we’ll be happy and move on.”

Fernando Cuadra Jr. recognized Line’s determination and took his chances at the starting line in round two, ultimately leaving .041-second too soon and illuminating the red light. Line surged ahead for a 6.574, 208.65 victory that gave him lane choice over Erica Enders in the semifinals.

“We did okay today, and we get another chance in Phoenix in two weeks, so I’m looking forward to that,” said Line, who will hang up his Pro Stock driving suit at the conclusion of the 2020 season.

“It’s been really humbling this weekend. I’ve had a lot of people saying really nice things, and some even saying they’ll miss me – that’s not something I hear a lot,” he continued with a laugh. “I don’t want to get caught up in being sentimental, because I still have a job to do for our team owner, Ken Black, and Summit Racing. I’m still thinking about what we have to do to get better before Phoenix, and we will be better.”

Line’s teammate Greg Anderson wheeled his red Summit Racing Chevrolet Camaro to a top-half start but was out early when his racecar disagreed with the racetrack and he had to abort the run. Chris McGaha was the victor in the first-round meeting, 6.590, 209.52 to 7.233, 148.18.

“Our Summit Racing Chevrolet Camaro was great, and we know we have horsepower, we just couldn’t seem to get the engine tune-up right,” said Anderson, a 94-time Pro Stock winner and four-time world champion in the category. “The track was tricky today, it was cold, and that makes it tough. That’s no excuse, it was tough for everyone, but you always hope for more. We could have and should have won that round. We’re looking forward and putting this one behind us, and we’ll start fresh in Phoenix in two weeks.”

KB Racing-powered Bo Butner was also on the trailer far too early when his Strutmasters/JBA Chevrolet Camaro overpowered the starting line. Steve Graham went along to win the round with a 6.619, 208.78 to 7.439, 207.05.

“That has never happened to me in a Pro Stock car before. I’ve had them shake and spin, but it spun before it even moved. That was different. But it’s a tricky track, and a lot of teams had some troubles. You can’t get upset – I told the guys, let’s go for it this year. It sucks for this to happen the first race, especially because we really like it here. But we like Phoenix, too.”