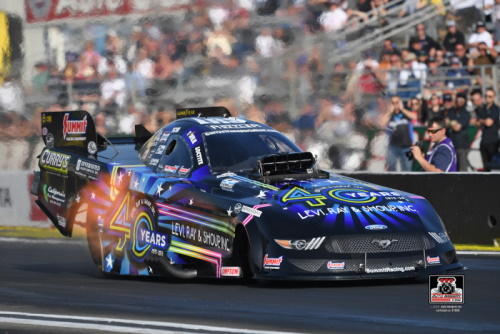 POMONA, Calif. (February 9, 2020) – The season-opening Lucas Oil NHRA Winternationals brought Tim Wilkerson and the Levi, Ray & Shoup Ford Mustang nitro Funny Car team the opportunity to fine-tune on a program in which they have plenty of faith. Wilkerson, now competing in his 25th season as a nitro pilot, scored a round win at the first race of the season and is eager to move on to Phoenix in two weeks and claim even more.

Starting from the No. 9 position, Wilkerson came up against an all-too-familiar foe in J.R. Todd. The two left the starting line simultaneously, but when Todd was up in smoke, Wilk powered ahead for a 3.879-second victory lap at 326.79 mph that would give him lane choice in the second round.

There, the Springfield, Illinois-native met up with Matt Hagan. Hagan took a small advantage at the starting line, and a bout of tire shake ended Wilkerson’s day there with the final numbers flashing 4.042, 284.03 to 6.083, 113.18.

“Today our LRS Mustang did exactly what it was supposed to do first round,” said Wilkerson, now No. 8 in the Funny Car standings. “Second round, the weather just got away from me, and it was just a little bit too weak.”

The conditions in Pomona on Sunday were cooler than they had been throughout qualifying, and the racing surface shifted as rain earlier in the day brought about a damp layer.

“I haven’t rattled the tires in 12 runs,” Wilkerson continued. “Oh, I was so mad. But overall, I’m optimistic, and things are pretty good, really. It’s a long year, and you know I’m usually pretty upbeat. Our car is cooperating, and hopefully it stays that way. It showed some good signs of being a star this weekend, so I’m happy.”