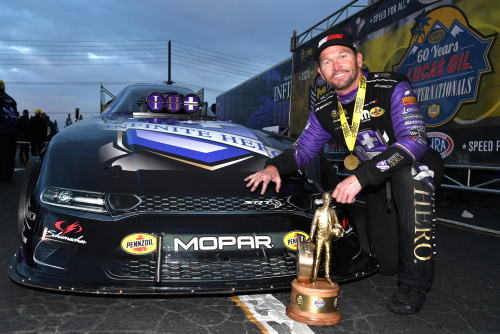 POMONA, Calif. (February 9, 2020) – A fast start to the 2020 National Hot Rod Association (NHRA) Mello Yello Series season was exactly what “Fast Jack” Beckman was looking for as he drove his Infinite Hero Foundation Dodge Charger SRT Hellcat to a national event win at the 60th annual NHRA Winternationals to kick off the year on the heels of his runner-up finish in the 2019 Funny Car Championship.

From his No.2 qualifying position, the Don Schumacher Racing (DSR) driver knew the stage was set for him to have a strong eliminations performance at the historic Auto Club Raceway in Pomona, Calif., and commence his drive for the 2020 Funny Car Championship immediately.

Beckman drove past Alexis DeJoria, DSR teammate Ron Capps, and Steve Densham to earn a berth in the final round versus John Force.

Force had a slight starting line advantage, but Beckman quickly powered his Dodge Charger SRT Hellcat to an exciting side-by-side battle before steadily making gains and taking the lead in the final stretch.

Beckman garnered his 31st career Funny Car national title, his second at Pomona after his first came in the 2019 season finale. 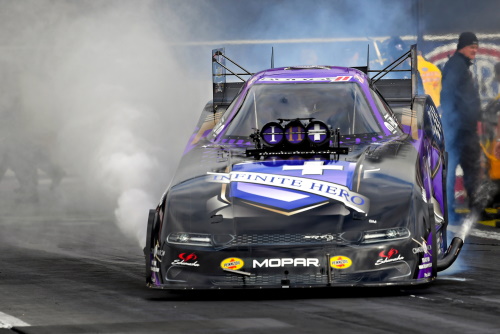 “It was just the perfect storm,” said Beckman. “I had never won a Nitro title here at Pomona until November of last year and now I’ve got two in a row. It’s beyond magical. I’ve said it before; you don’t know if your last win is your last win. I’m going to go out on a limb and say that this ain’t our last win. The Infinite Hero team is just on it. Our car has been amazing.”

DSR teammate and No.1 qualifier Matt Hagan knew he had a strong car and that the improvements made to the Mopar Dodge//SRT Charger Hellcat Funny Car throughout the off-season and qualifying put him in a position to repeat winning performances he had at the Winternationals in 2015, 2017 and 2018.

Hagan worked his way through eliminations to a semifinal match-up against John Force to whom he ceded lane choice. The left lane was unkind to the DSR driver and tire shake ended his hopes to advance further, but didn’t dampen his enthusiasm about starting off the 2020 NHRA season on a good note.

This weekend’s efforts put him top-three in the Funny Car Championship points to kick start what will surely be a very competitive season.

Seeded fourth, the MD Anderson Dodge Charger SRT Hellcat Funny Car of Tommy Johnson Jr. started the day off with his best run of the weekend to put Cruz Pedregon behind him and move on to the next round to face John Force. After a strong showing all weekend long, a dropped cylinder right off the startline in the quarterfinals to put the brakes on his efforts.

After qualifying seventh for eliminations, Ron Capps, a three-time winner at the Winternationals (1998, 2009 and 2016), and his DSR crew earned the “NHRA Never Rest” award for the coming back from the adversity of a trailer fire that claimed a car, equipment, and a chance to test prior to this first national event of the year. After clawing their way through qualifying, Ron Capps and his HEMI®-powered Charger SRT Hellcat Funny Car still had a tough road through the ladder.

The first round win light came on after leaning on the throttle a few times and a little sideways driving, but things didn’t get any easier as Capps faced teammate Beckman in the second round. Flames once again ruined the day for the Capps after losing a cylinder early on and then an explosion at the 300-foot mark ended his run for a final round appearance.

In Top Fuel action, Leah Pruett drove her DSR Mopar Dodge//SRT Dragster from a third seed placement on the eliminations ladder to post her quickest pass of the weekend for a first round win with a 0.084 second reaction time and elapsed time run of 3.659 seconds, the best of race day, at 328.14 mph.

Pruett then earned a quarterfinal win over Shawn Reed to send her to the semifinals against Austin Prock. While they both left the line with identical 0.062-second reaction times, Pruett’s HEMI®-powered Mopar lost traction early to give Prock the edge and the round win.

Mopar Dodge//SRT teams and drivers now have two weeks to prepare for the second of 24 events on the 2020 NHRA Mello Yello Drag Racing Series schedule, the NHRA Arizona Nationals at Wild Horse Pass Motorsports Park near Phoenix, scheduled for February 21-23. 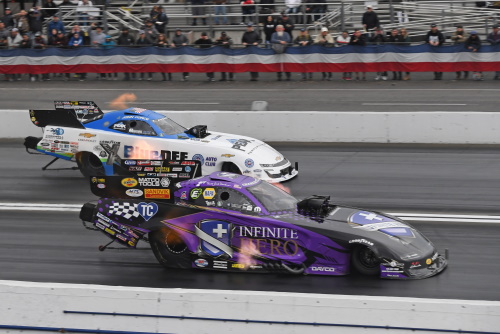 “To beat John Force in the final makes it a pretty cool weekend. It’s my home track. I probably spent more time down there on the start line than anybody else. I feel comfortable here with lot of friends and family out here today. It was just the perfect storm. I had never won a Nitro title here at Pomona until November of last year and now I’ve got two in a row. It’s beyond magical. I’ve said it before; you don’t know if your last win is your last win. I’m going to go out on a limb and say that this ain’t our last win. The Infinite Hero team is just on it. Our car has been amazing. We legitimately treated pre-season testing as testing. We changed some stuff in the cylinder heads, we ran our spare parts, we ran a whole lot of different disc packages in there, and then we went back to the November tune-up for here. We’ll phase in all the new stuff in as the season progresses. [That work] shows. We were top two every run in qualifying and except for the first round, we were low E.T. or second low of every single round. Our car was just absolutely amazing. As a driver, you don’t want to limp your way into the winner’s circle. You want to dominate. It was awesome for us.”

“I had great qualifying and test session and came out here and ran really well. We ended up going to the semis which was a good healthy weekend for us. All-in-all just a great way to start the season so I’m excited rolling into Phoenix. We’re going to make sure that we end up having some more good runs along the way. The car is working really well. We were No. 1 qualifier here in Pomona and I think we’re going to carry that momentum into Phoenix. Hopefully we can turn on some more win lights for Mopar Dodge, for Pennzoil, and for Sandvik and hopefully get a win soon.”

“We had a great car all through qualifying, low e.t. in the first round, so that [dropping a cylinder] was the last thing we expected out of this thing. Obviously something went wrong. It just doesn’t go from running that good to just dropping a cylinder right at the hit. We’ll look at all the data, find out what happened, and go into Phoenix with a lot of confidence on how well we ran this weekend.”

“We’re a little behind everyone else that had the luxury of going to pre-season testing in Vegas. I brag about the NAPA Know How our team has, and how Tobler is so well-prepared and has our team so well-prepared for situations like this. We would’ve loved to have made some more runs this weekend, but going .94 and a .91 right after that was such good medicine for these guys. Then, fast forward to Sunday and we beat (Bob) Tasca who’s been running really well; that was a big win. We wanted to end our ‘Cinderella weekend’ with a trophy but getting the ‘Never Rest’ award from NHRA was cool. To go out there, qualify top-half, get lane choice, win first round; we checked all of the boxes except winning the race. That’s pretty good considering these guys have spent a week tearing this thing apart and building a new setup.”

“Our heads are held very head high. It’s not easy to manage the amount of horsepower that this team is able to create, but how we manage it will reflect the potential that this team is capable of performing with throughout the year. We’ve found our groove, each crew guy is getting more comfortable with the car, and the results have shown that. This is a much better beginning to the season than we had last season, and we expect a good result at the end. For now, we’re extremely excited about what we can continue to pick away at. Managing the horsepower and the potential is going to be the highlight. We’re not struggling; we’re seeing a lot of great potential. Going into Phoenix next, we definitely plan on finishing the job there in our Mopar dragster.”