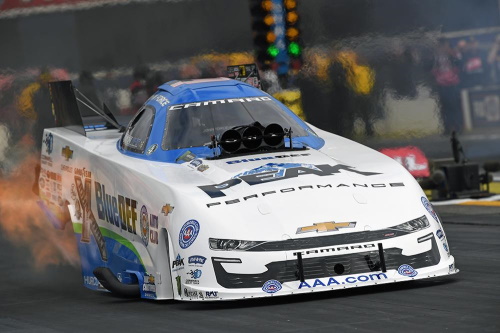 Beginning the chase for his 17th Funny Car world championship, John Force handled his BlueDEF Chevrolet Camaro SS to a 3.875-second pass at 329.02 mph to defeat Bob Bode’s 10.726 at 85.45 after he smoked the tires. Force’s win would put him against familiar foe Tommy Johnson Jr. in the quarterfinal. After both drivers dropped cylinders down track, Force and his 4.011-second pass at 275.06 mph powered past Johnson Jr.’s 8.431 at 80.69.

“It was a really good weekend. I didn’t win but I’ve got a real hot rod with my son-in-law Daniel Hood and Ronnie Thompson and Tim Fabrisi. Boy, to come out of the box and go to the finals. I have to congratulate Beckman, he did a great job up there with Dean Antonelli, they’re family,” Force said. “Jimmy Prock and Chris Cunningham always show us with Robert’s Auto Club car what they can do but you know, stuff happens, you can’t win them all. To see my dragsters do so well, Brittany with Monster running the way they are running, Montana Brand car with Austin Prock is really impressive. Frank Tiegs, who owns Montana Brand and Brittany’s other sponsor Flav-R-Pac, gave us some more good news, picking up the last two races with Brittany. You’ll see Flav-R-Pac in yellow next weekend and then it goes back to Monster and that’s just really exciting. We’re all just a big family out here and everything is really coming together. Sponsors are stepping up, our marketing is working hard, and our PR and social team are doing what they do. Excited to get to Phoenix.” 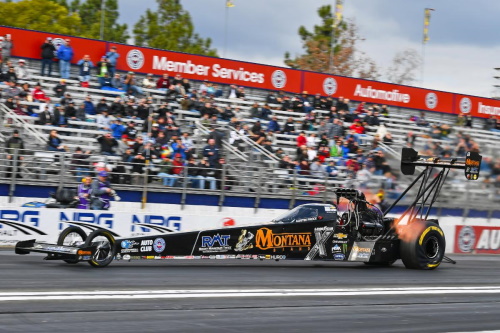 Austin Prock and the Montana Brand Rocky / Mountain Twist team opened race day at Auto Club Raceway at Pomona with a round one win over Cameron Ferre. Prock crossed the finish line with a 4.004-second pass at 316.15 mph bettering Ferre’s 5.164 at 143.60. On a solo run in the second round, the 2019 Auto Club Road to the Future award winner laid down a career-best 3.678-second pass at 330.96 mph and headed to the semifinals where he matched up with Leah Pruett.

With identical reaction times, a .062 light, Prock blasted to a 3.678-second pass at 330.63 mph defeating Pruett’s 4.927 at 140.69 after she went up in smoke. The semifinal win would put Prock against racing veteran and eventual event winner Doug Kalitta in the final. After having a consistent car throughout race day, Prock’s Montana Brand machine overpowered the track and immediately smoked the tires for a 10.939-second run giving Kalitta’s 3.698 at 330.23 the win.

“This Montana Brand / Rocky Mountain Twist team had a really good day and it was a great way to start off the season. Both of our John Force Racing dragsters were running on mean today. We had ourselves a bracket car there in the second round and semis and that is just kudos to the crew chiefs and the guys putting the car together,” said Prock. “You know, exactly the same every time makes it easy on Mike (Green) and Joe (Barlam). So, I had a lot of fun today because this thing is hauling ass and I am having a lot of fun driving it. Its reacting quick and allowing me to leave the starting line good so, I’m looking forward to Phoenix.” 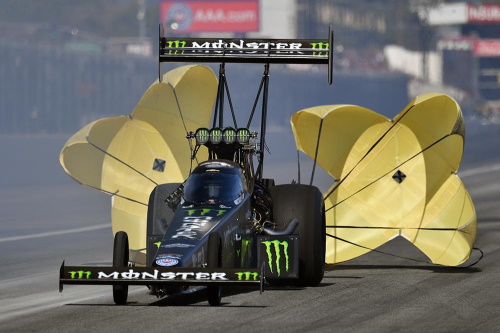 After picking up the No. 1 qualifier position, Brittany Force started race day with a solo run for the first round of eliminations. Force and her Monster Energy team were aggressive off the line and overpowered the track for an 8.648-second pass at 77.72 mph. She went onto the quarter finals and ran an impressive 3.682-second pass at 336.23 mph to take the win over Clay Millican’s 3.867 at 311.13. Advancing to the semi-finals, Force had a clean pass of 3.689-seconds at 332.84 mph in a tight race against Doug Kalitta who advanced to the finals off a of 3.675-second run at 329.36 mph.

“The first race of the season and this Monster Energy team along with Flav-R-Pac team is off to an incredible start with a No. 1 qualifier. It gave this whole team the confidence going into race day. We came out and went to the semifinals. We had a good day and made some decent runs. We won some rounds and I am very happy with that. I wish we could have gotten the job all the way done and taken it to the finals, but we still had our other Chevy teammates in the running with John Force in Funny Car and Austin Prock in the Top Fuel final. It was a good start to the season.” 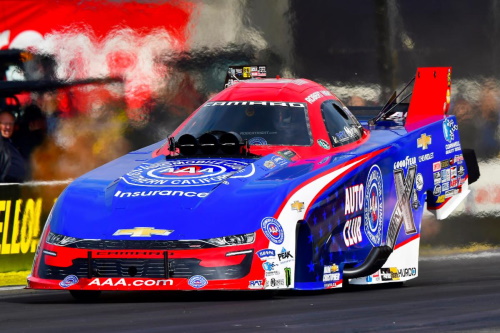 Reigning and three-time world champion Robert Hight, who picked up the victory at last year’s Winternationals, had a bit of luck in the first round of eliminations when the Auto Club of Southern California Chevrolet Camaro SS coasted down track for a 8.365-second pass at 85.58 mph after putting a hole out at the hit. Terry Haddock ran into trouble and shutoff at on the starting line giving Hight the round win. In the quarterfinals, Hight had a reaction time of .070-seconds but smoked the tires early and had to shut off to run a 10.238-second pass at 86.54 mph. Alexis DeJoria took the win with a 5.388-second pass at 136.12 mph.

“It wasn’t the day we wanted but we’re not going to dwell on it. We got some good information through qualifying. Race day we had a hole out on that first run but luckily Haddock had an issue too. Not the kind of race you want to put on, but it put us through,” Hight said. “The second round we overpowered the track and had tire smoke right at the start, and I had to lift. We’ll just chalk it up to a bad day and get things done in Phoenix.”