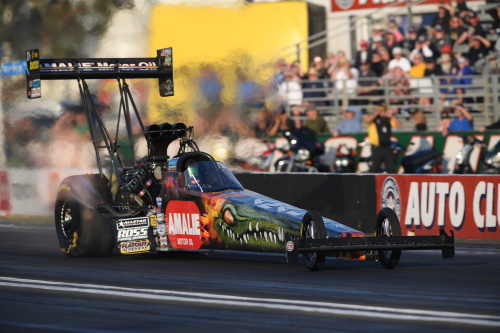 POMONA, Calif. (February 10, 2020) – The 60th annual NHRA Winternationals proved to be a solid first race for Terry McMillen and the AMALIEⓇ Motor Oil team . Beyond the race day results the team worked together acclimating new teammates and racing in challenging conditions giving McMillen a lot of confidence heading to Phoenix.

On race day McMillen and the AMALIEⓇ Motor Oil XTERMIGATORⓇ Top Fuel dragster were confident about what lay ahead in kick-off event of the NHRA Mello Yello Drag Racing Series season. The team did not participate in any pre-season testing so the first race was a good opportunity to make immediate improvement.

“I am really excited about getting the race started. We didn’t test so we didn’t get a good run in the first qualifying session,” said McMillen, an eight time Top Fuel career finalist. “The final two qualifying sessions were awesome. We ran mid 70s and we are sitting in the No. 7 spot going into the race. We feel comfortable but we know there is more out there. We need to pick it up but it will be a challenge today because it is going to be cold and the track will be tight.”

The Amalie Motor Oil Top Fuel dragster entered race day as the No. 7 qualifier and drew No. 8 qualifier Clay Millican in the first round. Both dragsters left the starting line nearly welded together but McMillen drove into severe tire shake. The veteran driver was able to pedal his 11,000 horsepower dragster but he was unable to track down his opponent. It was his fifth run of the season following four qualifying runs and for McMillen there was minimal rust to shake off on hos driving skills.

“It is really just like riding a bike,” explained McMillen. “You get in it and you just feel comfortable once you are in there. You go through the warm up and then the game is on. You would think you would be rusty but I really wasn’t.”

Coming out of the race and looking ahead to the next event at the end of the month in Arizona McMillen knows his team is coming together.

“Making solid runs to start the season shows how all the hard work over the winter has paid off,” said McMillen. “We have a couple new guys on the team so we are going through some transitional changes. We have a couple people in different positions. We are definitely working together to get more efficient. The car is solid and when we are making runs everything looks good after the run. Everyone is doing their job.”

Working through the pressure of top shelf competition was the biggest take away for the Amalie Motor Oil team. Racing at the highest level and having success like McMillen has experienced over the past seasons doesn’t come without hard work and practice. This weekend making consistent runs in the 3.70s before the weather shifted on race day set the team up for a great start to the 2020 season.

“We can practice all day long in the shop but it is totally different when you are at the race,” summed up McMillen. “The clock is ticking here and we train at the shop but this is the real deal. If you mess up here you don’t make the round. It is a little more tense for the guys. A few of them have a few jitters going into first round. This is the fun part of the sport. Everything has to be precise and because of all the power these race cars make if you make one mistake it is over.”

McMillen and the Amalie Motor Oil team will be back on track at the Arizona NHRA Nationals at Wild Horse Pass Motorsports Park, February 21-23.