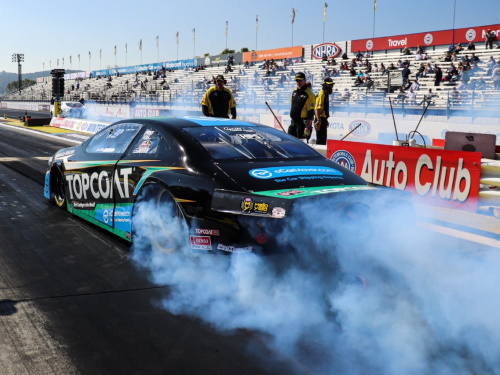 POMONA, Calif. (February 10, 2020) – The 60th annual Winternationals kicked off the NHRA Mello Yello Drag Racing Series and the TopCoat™ Dodge driven by Alan Prusiensky made a strong debut to get the 50th anniversary of the Pro Stock category started. Over two days of qualifying Prusiensky and the blue and black Dodge Dart branded with the TopCoat™ and F11 logos battled a tough field to make the top sixteen. Heading into the final qualifying session on Saturday Prusiensky was racing to bust into qualified field but the New Jersy based driver narrowly missed the field.

“We always expect to qualify,” said Prusiensky. “I had a tough two days driving and we had some mechanical issues fighting us. You know a little bit of the new car blues. The rev-limiter wasn’t turned on in Q1 because we didn’t know it was there since this is a new car for us this weekend. Those types of things put your back against the wall a little and we had to swing for the fences in Q4. I really felt like we could get in and I got too aggressive on the other side and blew the tires off.”

Last year Prusiensky survived a harrowing incident at the Charlotte national event during the NHRA Countdown playoff race. He was able to finish the season with sponsorship support from TopCoat™ that extended into the 2020 season.

“I couldn’t be out here without the support of TopCoat™ and F11,” said Prusiensky. “It is expensive to be out here and they will be a huge part of our success this season. We are excited to build the program from the end of last season. I have to thank ecarmover.com for giving us a Dodge Dart to race after our crash in Charlotte.”

During qualifying Prusiensky steadily improved and stayed with the field. Opening the first day with runs of 7.327 seconds at 153.28 mph and then an improved to 6.705 seconds at 207.43 mph. On Saturday the TopCoat™ Dodge posted qualifying runs of 6.684 second at 206.57 mph and in the final session he had extreme tire shake and had to lift and only running 19.782 seconds at 42.35 mph.

“It is new from me to have a big name sponsor like TopCoat™ with F11,” said Prusiensky at the end of qualifying. “We have a lot of fans and an excited fan base so knowing that we will be racing all the races and talking to people about TopCoat™ and getting them on TV is huge. For this team we are thrilled to be able to represent TopCoat™ and introduce their products to people all over the country. Our goal is to help them sell a lot of products and for us to qualify and get them as much exposure as possible. We are working hard to qualify and win rounds. That is the name of the game.”

Prusiensky and the rest of his Pro Stock competitors were getting the 50th anniversary season of Pro Stock underway at Auto Club Raceway at Pomona. Throughout the season the NHRA will be celebrating one of the most competitive classes in NHRA Mello Yello Drag Racing Series history.

“I always liked watching Pro Stock back in the day. It is cool to be our here with TopCoat™ racing in the 50th year of the category. I am really concentrating on my own program and giving this team everything I can,” added Prusiensky.

Next up for the TopCoat™ Dodge Dart Pro Stock team will be the Arizona NHRA Nationals hosted at Wild Horse Pass Motorsports Park, February 21-23, 2020.