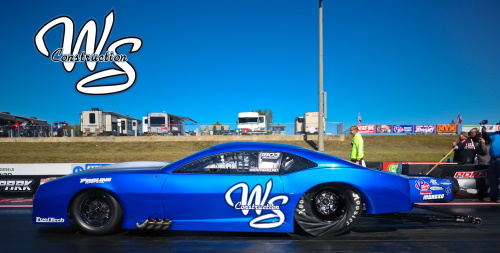 “[WS Construction President] Randy Weatherford has always supported PDRA as a racer,” said Will Smith, marketing director, PDRA. “Now, it means a lot to everyone at the PDRA to have his support as the presenting sponsor of our quickest and fastest class, Pro Boost.”

WS Construction was founded in 1988 and currently operates out of Danville, Virginia. The company is involved in projects throughout Virginia, the Carolinas, Georgia and Tennessee. Benefits of WS Construction’s pre-engineering buildings include faster occupancy, highly competitive costs, energy efficiency and easy expandability.

Weatherford, who switched to Pro Boost in 2019 after multiple seasons in Switzer Dynamics Pro Nitrous, decided to step up as a presenting sponsor of the class to show his support for the series and the class.

“A lot of us go out there and race and we take for granted that these series like PDRA give us a place to race,” Weatherford continued. “Some of us need to step up to the plate and help out. It still takes money to put the race on, and without that we have nowhere to race.”

Weatherford earned his first PDRA “660 Man” trophy in Pro Nitrous competition in 2018. He qualified No. 1 in his Pro Boost debut at the 2019 PDRA Fall Nationals, repeating the feat at the next race, the World Finals, setting the class record for elapsed time with a 3.597-second pass. He reached the final round at the World Finals before winning the independent World Street Nationals in Orlando to close out the 2019 season.

“I’m hoping that we’ll run for the world championship this year,” Weatherford said. “At the end of last year, we figured out our issue with the transbrake and went down to Florida and won the race at Orlando. I think we have a pretty good opportunity to win the championship with the combination I’ve got.”

The 2020 PDRA season will start at the PDRA East Coast Nationals presented by FuelTech, April 2-4 at GALOT Motorsports Park in Benson, N.C.