CHANDLER, Ariz. (February 17, 2020) – Last season wasn’t up to the usual impressive standards from Antron Brown, but you won’t find an ounce of discouragement from the three-time NHRA Mello Yello Drag Racing Series world champ. Coming off his first winless season of his career in the Top Fuel ranks, Brown, a 66-time event winner, is welcoming the journey to once again get back on top.

He’s back with former crew chief Brian Corradi, a tandem that led to massive success in previous years, and Brown is eyeing the 2020 season as a return to form in his 11,000-horsepower Matco Tools/Global Electronic Technology/Toyota dragster. The veteran standout knows what a quick start could mean for the year, leaving him determined and focused heading into this weekend’s 36th annual NHRA Arizona Nationals at Wild Horse Pass Motorsports Park.

“We feel good right now, even though we know we’ve still got our work cut out for us getting the car where we want it,” Brown said. “It doesn’t happen overnight. It’s going to take laps and we know that. But the journey is the meaningful part. We know nothing comes free and you have to put the work in. You can see the mountain in front of you. Are you going to let it eat you up or are you going to conquer it? That’s one of the parts I enjoy most and you go through it as a team. For us, it’s not a question of if we can do it. We’ve been there before.”

Billy Torrence (Top Fuel), Matt Hagan (Funny Car) and Jeg Coughlin (Pro Stock) were last year’s winners of a race that will be televised nationally on Fox Sports 1 (FS1), including finals coverage on Sunday, Feb. 23. The duel in the desert marks the second of 24 races during a 2020 NHRA season Brown ultimately hopes is better than his last two campaigns.

Prior to 2019, Brown won just one race in 2018, finishing sixth in points. He dropped to ninth a year ago, an uncharacteristic fall for a star who won back-to-back Top Fuel world championships in 2015 and 2016. Brown could never find his footing a year ago, prompting the move to reunite with Corradi. It’s a proven team, but there’s still an adjustment process as everyone comes together. The team was solid in testing, but lost in the first round in Pomona to start the year. Brown, though, wasn’t banking on instant success, knowing the team is going to continue to put in the work.

“We just have to be poised and confident in the process,” Brown said. “We all have to be in it together. There’s pressure for all of us and we all share it. If you take it and put it all on your own shoulders, that’s when you start messing up. That’s where experience pays off and that’s one of the biggest things with this team and our backgrounds.”

It’s clearly a winning background, as Brown’s 50 Top Fuel victories are fourth most in class history. He’ll look to add to that in Phoenix, where he has three career wins. Standing in his way is an array of talent, including Pomona winner Doug Kalitta, back-to-back world champ Steve Torrence, 2017 world champ Brittany Force, Shawn Langdon, Austin Prock, who was last year’s top rookie, Leah Pruett, Terry McMillen and Clay Millican. But a strong performance in Phoenix could be just the boost the team needs early in the season.

“If you get off to a good start, you can start building momentum,” Brown said. “If you have good races, that means you’re making eight laps and you’re going to learn more to grow and be better. If you’re making less runs, that’s less data you’re getting. We just have to continue to stay the course and keep raising our level of performance. We’ve all worked together in the past and we know we can communicate with each other, so that’s big.” 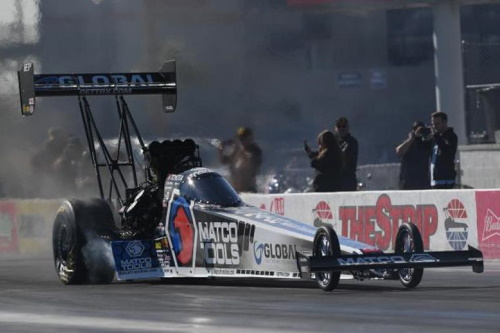 In Funny Car, Hagan will look to keep his winning ways going at Phoenix while continuing the momentum from the hot finish to his 2019 campaign last season. His Don Schumacher Racing teammate Jack Beckman opened 2020 with a victory in Pomona and he’ll be challenged by the likes of reigning world champ Robert Hight, 2018 champ J.R. Todd, Alexis DeJoria, Ron Capps and John Force.

Celebrating its 50th anniversary in 2020, the Pro Stock class will head to Phoenix with plenty of fanfare. The class continues to provide plenty of thrills, led by defending event winner Coughlin, who won the opener in Pomona. He’ll match up with the likes of defending champ Erica Enders, Greg Anderson, Jason Line, Alex Laughlin, Bo Butner, Deric Kramer and Chris McGaha.

NHRA fans can take part in the Mello Yello Walking Tour to see the cars and teams hard at work in the pits. Fans can also attend Pro Stock School and Nitro School to learn how the cars operate and reach their thrilling speeds. Wild Horse Pass Motorsports Park will also host a Mello Yello autograph session and allow fans to meet their favorite drivers as well as the Sealmaster Track Walk hosted by NHRA announcer Joe Castello. Another can’t-miss experience is the winner’s circle celebration on Sunday after racing concludes, which will now take place on the racing surface. NHRA fans are invited to congratulate the winners of the event as they celebrate their victories.

To purchase general-admission, reserved seats or a Camp Wild Horse spot, call (800) 884-NHRA (6472) or visit www.NHRA.com/tickets. Kids 12 and under are free in general admission areas with a paid adult. To honor the Salute to First Responders, military and first responders can save 20 percent on general admission tickets at the gate. For more information about the NHRA visit www.NHRA.com.