ENNIS, TX (February 18, 2020) – The world renowned Texas Motorplex will be celebrating its 35th year of showcasing the fastest sport in the world, the NHRA Mello Yello Drag Racing Series, and the upcoming International Drag Racing Hall of Fame induction of track founder and owner Billy Meyer with a season long Hall of Fame celebration. Since 1986 Texas Motorplex, located between Ennis, Texas and Waxahachie, Texas has featured the most exciting racing and biggest names in professional drag racing. Tickets for the October 15-18, AAA Texas FallNationals are on sale now following a highly successful renewal period and while supplies last each order will receive a commemorative 35th anniversary coin. The fourth of six Countdown championship playoff events, the FallNationals, is where title hopes are on the line, and champions are won.

“We had one of the most successful ticket renewal periods we have every experienced,” said Andy Carter general manager of Texas Motorplex. “More of our long-time FallNationals ticket holders either upgraded their orders to areas like the Champions Club with starting line seats or they added tickets to their previous packages. We had an amazing race last year with Kilgore’s own Billy Torrence getting the win in Top Fuel before going on to win his second consecutive Top Fuel world championship.” 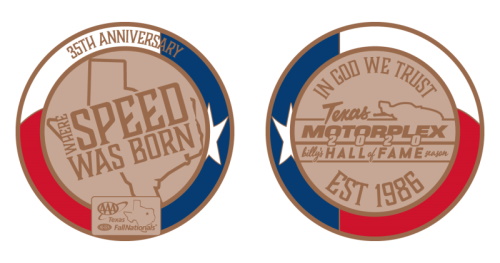 Next month former Funny Car racer and track founder Billy Meyer will be inducted into the International Drag Racing Fall of Fame owned by drag racing legend “Big Daddy” Don Garlits. Meyer, who now lives in Austin, has had an amazing career as a racer, car owner and track operator. Texas Motorplex is still considered one of the premier performance race tracks in the country after over 30 years. Even with all the success and history Carter knows Meyer wants to continue building on his legacy.

“This year at the FallNationals we are bringing in more fan and family-friendly activities to add to the on-track racing action,” explained Carter. “We added a few elements last year but this year we are really ramping it up, with more premium seating, a track-side pavilion is in the works modeled after the Byron Nelson experience and we are even exploring more on-track elements to wow the fans. We want to give the hard core fan what they want but we are also very aware we need to cater to new fans.”

The 2020 season for Texas Motorplex will kick-off with the Lone Star Nationals the weekend of March 27-28 and throughout the season they will host ADRL national events, No Prep Races, Redemption Series events, the Jumbo BBQ Challenge Cook-Off and weekly events to help keep racers off the streets.

Texas Motorplex was the first all-concrete stadium-style drag racing facility constructed. Built in 1986, Texas Motorplex has been the place of many drag racing milestones and world record performances. The Billy Meyer-owned facility hosts a number of racing and car show events between January and November each year and also features the Champion’s Club – an 11,000 square-foot facility – that serves fully catered events throughout the year.

Fans can order tickets at www.texasmotorplex.com or call 800-MOTORPLEX.