CHANDLER, Ariz. (February 19, 2020) – Craving the spotlight has never been part of Jason Line’s personality, but during his final season of full-time racing in the NHRA Mello Yello Drag Racing Series, the three-time Pro Stock world champion may experience it more than usual in 2020. That was apparent during the season opener in Pomona, and it’s a good bet there will be an outpouring of fan support for the veteran at this weekend’s 36th annual NHRA Arizona Nationals at Wild Horse Pass Motorsports Park.

Line has been a constant in the Pro Stock class over the years, piloting his Summit Racing Equipment Chevrolet Camaro to incredible success in workmanlike fashion. Now in a final full-time season dubbed “The Finish Line Tour,” Line will look to close things in style. A fourth world championship is certainly within reach and, along the way, the longtime standout hopes to enjoy some special memories by way of victories and winner’s circle celebrations.

“A lot of folks in Pomona had some nice things to say, and that was pretty cool to see and nice to know that I haven’t completely worn out my welcome after this many years,” Line said. “It’s been good. We’re only one race in, but I’ve been able to enjoy that part of it. The people can be the best part of this sport, so that’s been enjoyable. I’m looking forward to the rest of it as well and I think it’s going to be a lot of fun.”

Billy Torrence (Top Fuel), Matt Hagan (Funny Car) and Jeg Coughlin Jr. (Pro Stock) were last year’s winners of a race that will be televised nationally on Fox Sports 1 (FS1), including finals coverage on Sunday, Feb. 23. The duel in the desert marks the second of 18 races during a 2020 Pro Stock season that will also include the 50th anniversary celebration of the class.

That bit of history adds an extra layer to the season for Line, who has made 375 career starts in the class heading to Phoenix. He picked up his 50th career win in Pro Stock a year ago, further exemplifying what he’s meant to the class. In the present, though, Line wants to add to that win total, knowing there will be time down the road to feel nostalgic.

“It’s definitely cool to be part of the 50th anniversary celebration (of Pro Stock),” Line said. “It’s been a fun way to make a living and it’s been fantastic. From a participation standpoint, the class is the best it’s been in a few years and that’s a good thing. At some point, I’ll be nostalgic about it, but not right now. It’s been a great ride and I want to enjoy this last season. Just winning races is really the only goal. You can’t win the championship this early, so just winning races is important.”

Line came close at the NHRA opener in Pomona, falling in the finals to longtime rival Coughlin, who was dominant all weekend en route to the victory. Coughlin is the defending winner of the event, so Line knows he has his work cut out for him in a class that also includes longtime teammate Greg Anderson, reigning world champ Erica Enders, Bo Butner, Deric Kramer, Alex Laughlin and Matt Hartford. But Line remains as talented as he’s ever been, and just because this is a retirement tour, it doesn’t mean Line is slowing down.

“I’m not dead yet,” said Line, who won two races in 2019 and also has two career wins at Phoenix. “I feel like we’re going to compete for a championship as we hope to every year and, of course, my goal is to win a title. It would be nice to be on top again. It’s all about peaking at the right time. That’s my goal and it’s certainly a possibility. We’re testing and trying some new things, but our goal is to keep winning races.” 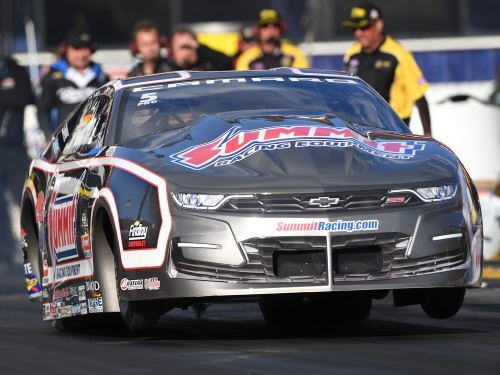 In Funny Car, Hagan will look to keep his winning ways going at Phoenix while continuing the momentum from the hot finish to his 2019 campaign. His Don Schumacher Racing teammate Jack Beckman opened 2020 with a victory in Pomona and he’ll be challenged by the likes of reigning world champ Robert Hight, 2018 champ J.R. Todd, Alexis DeJoria, Ron Capps and John Force.

NHRA fans can take part in the NHRA 101 Walking Tour to see the cars and teams hard at work in the pits. Fans can also attend Pro Stock School and Nitro School to learn how the cars operate and reach their thrilling speeds. Wild Horse Pass Motorsports Park will also host a Mello Yello autograph session and allow fans to meet their favorite drivers as well as the Sealmaster Track Walk hosted by NHRA announcer Joe Castello. Another can’t-miss experience is the winner’s circle celebration on Sunday after racing concludes. NHRA fans are invited to congratulate the winners of the event as they celebrate their victories.

To purchase general-admission, reserved seats or a Camp Wild Horse spot, call (800) 884-NHRA (6472) or visit www.NHRA.com/tickets. Kids 12 and under are free in general admission areas with a paid adult. To honor the Salute to First Responders, military and first responders can save 20 percent on general admission tickets at the gate. For more information about the NHRA visit www.NHRA.com.