Each year, the Canadian Motorsport Hall of Fame selects a young driver who has had an impact on our community and shows the potential to greatly increase that impact over the coming years. Great names have received this honour, such as Lance Stroll and Nicholas Latifi, for example. Raphael Lessard’s great accomplishments in the stock car world over the past two seasons have not gone unnoticed in Canada as well as south of the border and justify this nomination by the Canadian Motorsport Hall of Fame as this year’s Rising Star. 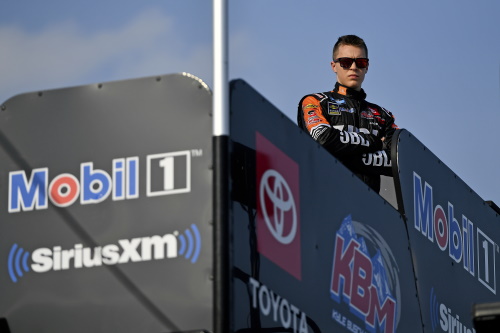 Since you haven’t been to Vegas before, what have you been doing to prepare? “I’ve studied a lot of video, in-car cameras from last year and the year before, and TRD has an awesome simulator that we can use and we practice a lot with the team, Kyle Busch Motorsports, Mike Hillman Jr., my crew chief. I think we should be pretty good, it’s just going to be about me getting used to a mile and a half and the aero stuff and everything to be fast. I’m just really looking forward to it and hopefully my Mobil 1 Tundra is as good as it was in Daytona.”

What did you think about your Daytona debut? “I think it was a lot of fun. I learned a lot. I can finally say that I raced at Daytona. That’s pretty amazing, it’s a dream come true. I think it went really well for my first race there. In the draft, the truck was handling amazing. Just a lot of learning and I’m ready to keep learning going on to Vegas.”

KBM-062: The No. 4 Mobil 1 team will unload chassis number KBM-062 for Friday’s Strat 200 at Las Vegas Motor Speedway. This chassis is brand new.