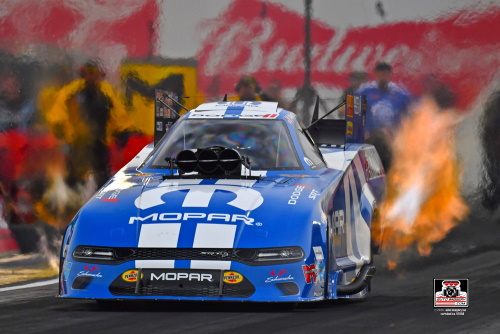 Hagan, a three-time event champion, is getting used to closing out his Friday evenings as the No. 1 qualifier. He captured the provisional pole at the last two events (Pomona 1, 2020, and Pomona 2, 2019), and on both occasions, he remained at the top of the leaderboard to start Sunday’s elimination rounds. He is confident the trend will continue this weekend at Wild Horse Pass Motorsports Park, especially given his track record of success at the Chandler, Ariz. facility where he returns as the defending event champion.

“I wish we could race all 24 events here,” joked Hagan. “Sometimes things just click at certain tracks. We just always seem to do well here. It seems like we knock the rust off in testing, then at Pomona, we’re working the kinks out, and by the time we get here, we just seem to have found our groove. Some tracks you just do really well at, and this is one of those places for us.”

Right out of the gate on Friday, Hagan’s Mopar machine was quick and consistent. Crew chief Dickie Venables tuned Hagan’s Hellcat to a 3.882-second at 324.75 mph Q1 run, which held up to be the second-quickest pass of the session. Knowing they were safely in the field, Venables opted to put it all out on the line for Q2, and his boldness paid off when Hagan’s 3.859 E.T. was enough to score the provisional pole.

“The conditions were great today,” said Hagan, who entered the weekend sitting third in the Funny Car standings due to his strong Pomona showing which included a semifinal finish in addition to the Funny Car pole. “Dickie went into Q2 tonight no-holds-barred, just ready to lay it down. He looked in the car at me, opened up the flows, and let it eat. And, it stuck. The car is good, the track is good, just all around a really good pass for this Mopar Dodge Charger SRT Hellcat. I’m glad to be putting on a show for these fans, and I’m enjoying hanging on to a really fast race car right now.”