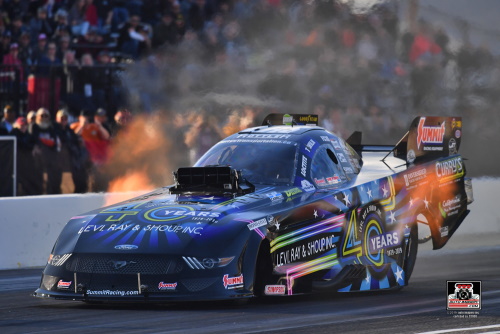 PHOENIX, Ariz. (February 23, 2020) – The second race of the 2020 season of NHRA’s Mello Yello Drag Racing Series was met with a bit of challenge on Saturday at Wild Horse Pass Motorsports Park. The NHRA Arizona Nationals kicked off on Friday with two smooth rounds of qualifying, but on Saturday a lengthy rain shower put final qualifying on hold until late in the afternoon.

Once the clouds moved out, though, a brilliant blue sky and streaming sunshine highlighted the day. Tim Wilkerson and his Levi, Ray & Shoup Ford Mustang made good use of the circumstances, and he recorded his quickest pass of the weekend to lock into the No. 7 position. Wilk will start Sunday with a first-round meeting with Alexis DeJoria.

After two very solid passes on Friday, the Springfield, Ill., racer clocked a 3.889-second pass at 329.10 mph in the final qualifying session that stood out as the second-quickest of the round and came with a pair of bonus points.

“We were trying to go a little faster than that, but I haven’t quite figured out how to make my car go early yet,” said team owner/crew chief/driver Wilkerson, who won Phoenix in 2016. “My LRS Mustang is fast, but it isn’t ‘fast’ fast yet. It’s deadly consistent, though. I think it’s going to give me a little margin of error later on in the year when the tracks are a little dicier. It’s giving me a little bigger window to work in, so if I get up there and screw up, there is a better chance that it’ll still go down the track.”

“Man, this Mustang sure does go down the track nice. Holy moly,” he exclaimed. “Hopefully the tuning window is going to get a little bit bigger for us as we go, but everything is working good right now, our guys are doing a good job, and this Ford Mustang Funny Car body is really working well. We’re excited about all of that, so tomorrow we’re just going to go up there and race the racetrack. We’ve got a good chance, and that’s all you can ask for.”

Eliminations for the NHRA Arizona Nationals will begin at 11am MT on Sunday at Wild Horse Pass Motorsports Park in Chandler, Ariz.