“I got out of the car and I’m asking, did Tony smoke the tires?”, McMillen said after the win. “I mean he’s the champ for a reason, you just expect him to be there. I’m looking around and I didn’t see him, I didn’t hear him, but I wasn’t lifting until I reached the finish line.”

“I think we dropped a cylinder right there at the end and when we got back to the pits we found out that we lost the computer,” McMillen said. “We thought we found the issue and everything looked good when we warmed it up, but when we got back out there for the second round the computer quit again. So, we’ve got nothing. No dashboard – nothing. Rob (Wendland, crew chief) and I were doing our best to kind of guess at fuel pressure and idle RPMs and we thought we had it pretty close.”

McMillen faced and lost to J.R. Todd in a second round match-up. 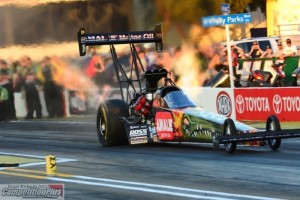 “We might have guessed a little lean,” McMillen said of the computer-less setup he and Wendland attempted at the starting line when the car’s on-board computer failed.. “A little ‘spicy’ as Rob likes to say,” McMillen joked. “The flames got a little green down there and with J.R. Todd pulling away, we thought we’d save some aluminium for another day, so I lifted.”

“Honestly, everything did it’s job well,” McMillen added. “The AMALIE Motor Oil kept everything lubricated, the Ross Pistons and Carillo Rods held up under the lean conditions and those Flatout Gaskets kept everything where it was suppose to be – in the motor.”

“Our team is really starting to come together nicely,” McMillen said. “These guys have worked tirelessly and unselfishly, night and day to get where we are at. It’s not perfect, but it’s pretty darn close.”

“I also want to personally thank Don Schumacher and everyone at his organization that helped put this car together. Rob and I feel like we have a hot rod that we could drive down a dirt road. It’s my first DSR car and I can truly say that it’s a dream to drive.”

The team would also like to thank the Radisson Ontario Airport for its support and hospitality during the NHRA Winternationals.

McMillen is headed to Phoenix, 8th in points, with his best start since 2011, for the Carquest Auto Parts Nationals at the Wild Horse Pass Motorsports Park. The race will be contested February 26-28th. Visit NHRA.com for more details.