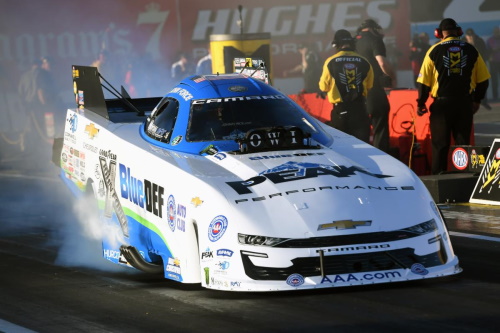 Entering race day as the No. 2 qualifier, John Force powered his BlueDEF Chevy Camaro SS to low ET and top speed of the round when he laid down a 3.848-second pass at 335.90 mph defeating Terry Haddock’s 7.692 at 86.52 after he lost traction. In the quarterfinal, Force was matched up with veteran racer Tim Wilkerson. Force handled his 11,000-horsepower hot rod to a 3.894-second pass at 332.43 mph to advance to the semis after Wilkerson left the starting line early for a red-light start. The 43-year racing legend headed to the semis where he had a clean 3.917-second pass at 326.63 mph but fell short to Don Schumacher rival and eventual event winner Jack Beckman and his 3.882 at 329.91.

“I was hoping to get to the final to get a shot at the win. I was rooting for (Jack) Beckman to take Tommy (Johnson Jr.) out so I could be second in points. It’s a long season though so it’s okay, it doesn’t matter too much right now, it’s just two points,” said Force. “I was able to win some rounds got some plugs for our sponsors and upcoming things we have going on with BlueDEF and Chevrolet and Cornwell Tools. You need rounds to get those plugs in. Anyway, it didn’t go the way I wanted but we’re okay.” 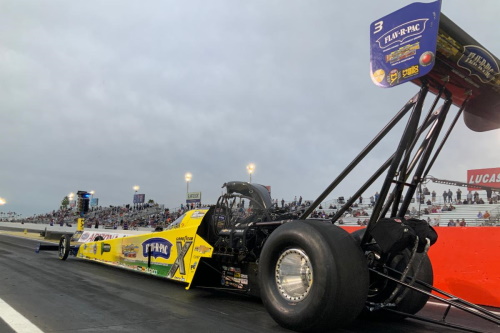 After securing her second consecutive and 20th career No. 1 qualifying position, Brittany Force and the Flav-R-Pac team kept things consistent on race day coming out of the box with a 3.685-second pass at 334.15 mph that set both ends of the Wild Horse Pass Motorsports Park track record to defeat Terry Totten’s 8.635 at 84.50 after he had tire smoke. In the second round, Force lined-up with the most recent race winner, Doug Kalitta. The David Grubnic and Mac Savage tuned hot rod had another stellar number of 3.685-seconds at 334.15 mph but, it wasn’t enough for Doug Kalitta’s 3.695 at 325.69 mph coupled with his .074-second reaction time. Force, who was .104 off the line, ended the day in the quarterfinals on a hole-shot.

“Hole shot losses are tough, but I have an incredible team behind me. My Flav-R-Pac guys are a super supportive team. I’ve already sat down and talked with David Grubnic and Mac Savage” said Force who leaves Wild Horse Pass sitting second in the points standings. “Overall, we’ve had a great weekend. We qualified No. 1, second green hat of the season. Unfortunately, we got taken out early, it was driver error, I know what I did, I’ll work on it, we’ll keep working hard and we’ll be ready for Gainesville.” 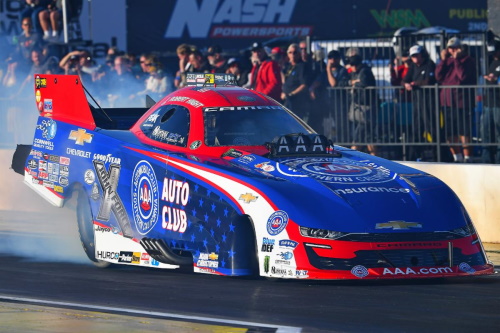 Three-time and reigning world champion Robert Hight and the Auto Club Chevy Camaro SS team went up against Jim Campbell in round one of eliminations. Hight, who was strong off the starting line, smoked the tires down track and had to shut off early for a 7.416-second pass at 90.63 mph while Campbell ran a 4.591 at 248.16.

“Today wasn’t the race day this Auto Club Chevy team hoped for, but we’ll be testing tomorrow and figure some things out,” said Hight. “Jimmy Prock and Chris Cunningham, all my crew guys, we’re really eager to get this thing running how we know it can. I’m looking forward to getting down the track tomorrow and bringing what we learn out to Gainesville in two weeks and defend our win from last season.” 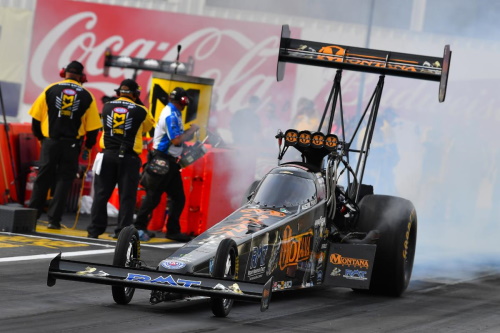 Austin Prock had an early first round exit at the Arizona Nationals when his Montana Brand / Rocky Mountain Twist dragster overpowered the track and lost traction off the starting line. Prock ran a 9.008-second pass at 78.60 mph against Billy Torrence who made a 3.693 at 322.73.

“We struggled today. We’re still trying to work some things out with this hot rod and we’re just too aggressive right now. Everything is lined up just how it should be and its fast, but our window isn’t big enough,” said Prock who was named the 2019 Auto Club Road to the Future event winner last season. “We’re walking on a string instead of a plank on the starting line so, we’re going to stay and test tomorrow and get things ironed out so we’re ready to go into Gainesville. The car is putting up the numbers it needs to, to win rounds and it showed in Pomona but as we get further into the season the track gets warmer and less traction so we definitely need to get our ducks in a row so we can be a contender in Gainesville.”