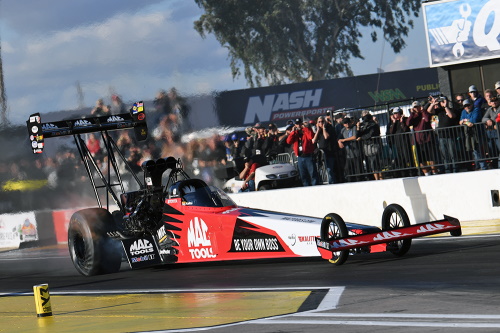 The Mac Tools team and Doug Kalitta advanced to their third consecutive final round in a row extending back to last season’s win at the Auto Club Finals. Two weeks ago Kalitta claimed his third consecutive win at the historic Winternationals in impressive fashion defeating the No.1 and No. 2 qualifiers on the road to victory. Today at the NHRA Arizona Nationals Kalitta blazed his way to another final round in the desert and came up just short of claiming his second Top Fuel win at Wild Horse Pass Motorsports Park.

“We had a great day today ever if we didn’t get our second win of the season,” said Kalitta. “Our performance all day just kept getting better and better. I have to thank everyone at TRD, NGK and Mobil 1 along with Mac Tools for all the support. We had some tough competitors and just about every round we were racing a championship caliber team. We got three win lights and we’ll head to the Gatornationals with some momentum.”

Kalitta entered race day as the No. 8 qualifier but he made solid and quick runs to defeat Shawn Reed, Brittany Force and Antron Brown before falling to two-time world champion Steve Torrence in his 103rd career final round. Kalitta picked up three round wins today giving him a career total of 697 round wins.

In the final round Kalitta left beside Torrence and both Top Fuel dragsters were roaring down the track when his Mac Tools dragster hazed the tires for the first time on race day. That was just enough of an opening for his opponent to shoot past him for the win. Kalitta will leave Phoenix as the Mello Yello Top Fuel point leader with 212 points and a commanding 59 point lead over second place.

The veteran driver’s day started with a strong performance win over Reed. He laid down his quickest and fastest run of the weekend lighting up the scoreboard with a winning time and speed of 3.711 seconds at 330.07 mph. The speed was Kalitta’s fastest speed of the young 2020 season.

In the second round he faced the No. 1 qualifier Brittany Force. For the second race in a row Kalitta was too much for Force to handle. His Mac Tools dragster stormed down the track with 3.695 second run. The race was decided on the starting line when Kalitta grabbed a reaction time advantage and it paid off at the finish line. He took the win by eleven feet at over 325 mph.

Kalitta took lane choice and momentum into the semifinals against Antron Brown. It was another dominant win by the Mac Tools team. The strength of their performance partners in NGK spark plugs and Mobil 1 gave Kalitta and his team confidence to continue to press for quicker elapsed times. The 2019 Top Fuel championship runner-up made a monster run against Brown crossing the finish line in 3.672 seconds at 330.55 mph. The run gave Kalitta lane choice headed into the final round.

“That semifinal round win was impressive. We knew we could step it up and that run was just about perfect. We went right on down there and got a win. Running 3.67 is pretty impressive and just shows how much confidence Rob Flynn has in this race car. I couldn’t be more proud of this whole Mac Tools team,” added Kalitta.

The final featured the top two teams from 2019 and gave the sellout crowd a preview of a battle that many believe will rage all season. Both drivers left with .066 reactions times and Kalitta’s dragster lost traction for a millisecond and that cost his team today.

Quotable:
Doug Kalitta on start of 2020 season: “Man, we are off to a great start. I would have loved to have gotten another win today but you look at our performance and we got stronger every run. It looks like we might have given it a little too much in the final but we can correct that. We have the points lead and we are giving the fans and our sponsors like Mac Tools, Toyota, Mobil 1, NGK, Sealmaster and WIX Filters a great show.” 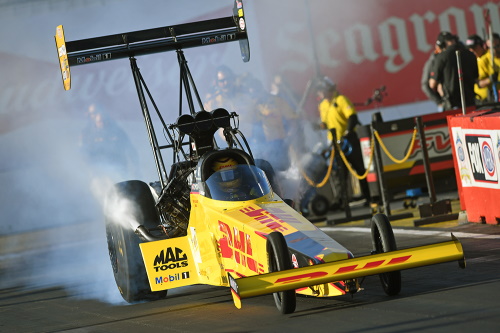 Shawn Langdon and the DHL Top Fuel dragster team were looking at the NHRA Arizona Nationals as chance to continue to get acclimated to Top Fuel competition. After a two year stint in Funny Car Langdon was quickly coming up to speed on getting back into the groove of racing the quickest race cars on the planet.

After three rounds of qualifying Langdon rolled into race day as the No. 7 Top Fuel dragster on the strength of a 3.733 second pass. In the first round he was matched up with veteran driver Clay Millican and he knew he would need to be at the top of his game. Langdon left first and never trailed. His winning time of 3.717 seconds was his quickest time of the weekend.

“I was pretty pumped after that run,” said Langdon. “It is great to start the day with our best run of the weekend. You can’t take anyone out here for granted. That was my first round win back in Top Fuel and it felt pretty good.”

In the quarterfinals Langdon faced the two-time world champion Steve Torrence who was racing for the first time in 2020 but was the No. 2 qualifier. Once again Langdon took the lead off the starting line and was beginning to pull away when his DHL Top Fuel dragster overpowered the race track. Langdon immediately lifted off the throttle and he saw that his opponent was also battling to control his 11,000 horsepower dragster. Langdon got back on the throttle in an effort to chase down Torrence and was making progress but the 2013 Top Fuel champion ran out of race track.

Torrence got the win with a pedestrian 4.570 second pass as Langdon tripped the finish line timing beam in 5.17 seconds.

“That second round race was wild,” said Langdon. “We were going to get after it but smoked the tires. I got off the throttle and saw Steve having some issues. That is when it gets exciting. I got back on the throttle but I just couldn’t catch up to him. Runs like that bring back a lot of muscle memory so that is a big positive. We would have liked to have had a longer day but we will get after them at the Gatornationals.”

Quotable:
Langdon on heading to Gatornationals: “The next race is one of the biggest races of the year. Everyone talks about the Gatornationals. We have made some good runs there but I would love to get one of those historic wins.” 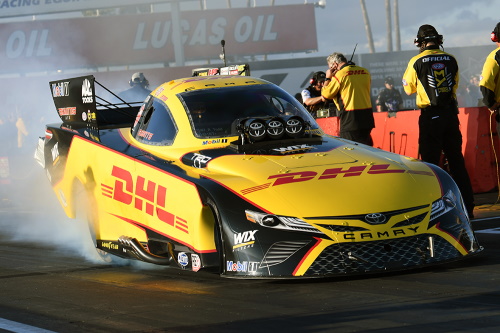 The DHL Toyota Camry Funny Car team was making a run at reaching their second consecutive final round at the NHRA Arizona Nationals today at Wild Horse Pass Motorsports Park outside of Phoenix. For driver J.R. Todd he was looking to build some momentum as the 2020 NHRA Mello Yello Drag Racing season entered its second race of the season.

Rain cost all the teams a qualifying run yesterday and Todd and the DHL Camry Funny Car team rolled into race day as the No. 9 qualifier. Their best effort during qualifying was a 3.916 second pass and they knew they needed to step that up most likely on race day.

Clear skies greeted the team today and Todd was able to watch his Top Fuel teammate Doug Kalitta and Shawn Langdon pick up round wins in Top Fuel before the start of the Funny Car category. Todd was paired with veteran Rob Capps and the two former world champions were the last pair of Funny Cars to hit the track. There were a number of upsets prior to their run and the track was showing that it could be anyone’s race.

Todd and his DHL Camry jump off the starting line and has he is accelerating down track his Goodyear tires shake loose and he has to watch as his opponent pulls away for the win.

“This was a tough weekend for sure but from the inside I see a lot of progress on this DHL Toyota Camry team,” said Todd. “The conditions have been all over the place these first two races and we have had a few hiccups for sure. You look at the category and there are a couple of teams that have gotten off to a hot start but it is so early in the season we are just going to keep grinding. We have a lot of support from WIX Filters, TRD, Sealmaster as well as Mobil 1 and NGK so we are going to keep getting better.We are going to get back to the shop and get ready for Gainesville. That is one of our biggest races and I am excited to show off for those fans.”

Quotable:
J.R. Todd on battling weather on Saturday: “I have to give it to our fans. They waited out a major rain storm to see our qualifying session. We have the best fans for sure. You want to get as many runs as possible for losing a round is a bummer. I think we are right on the cusp of figuring a few things out on this DHL Camry Funny Car.”

About Kalitta Motorsports:
Based in Ypsilanti, Mich., Kalitta Motorsports is a Top Fuel and Funny Car drag racing team in the NHRA (National Hot Rod Association) Mello Yello Drag Racing Series. The team was founded and is owned by drag racing icon Connie “the Bounty Hunter” Kalitta. For more than 60 years, Connie has been involved in the sport as a driver, tuner, and an owner. Kalitta Motorsports is one of the most successful teams in the history of auto racing with seven world championships and over 100 national event titles in five different professional drag racing sanctioning bodies since it was established by Connie in 1959.